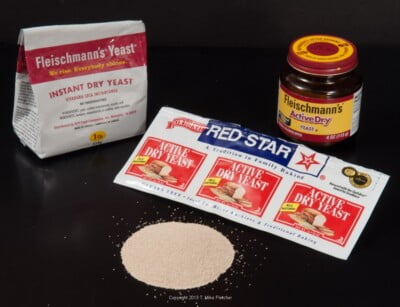 Yeast cells are single cell living organisms that are a part of the fungi group.  Approximately 15 million are in one pound of compressed yeast.   One of the oldest living organisms, dating back to the Egyptians, it continues to help mankind make bread and beer.  Hieroglyphs show Egyptians 5,000 years ago in bread bakeries and making beer –  maybe not the beer we know, but beer nevertheless.  Both of these were dependant upon yeast, just as they are today.  But it was Louis Pasteur who proved that living yeast is necessary for fermentation.

The yeast most often used today is Saccharomyces cerevisiae which translates in Latin to “sweet fungi of beer.” There are 1,500 strains of yeast that have been identified but that is just 1% of the strains believed to exist but are not yet named.

The yeast we use for baking is a domesticated wild yeast that manufacturing has stabilized and made 200 times stronger than it was in the wild.  Plant scientists decide which characteristics of wild yeast are desirable and put them on a diet of cornsyrup to make them reproduce.  When they reproduce to the desired degree, they are filtered, dried, packaged and shipped off to market. END_OF_DOCUMENT_TOKEN_TO_BE_REPLACED