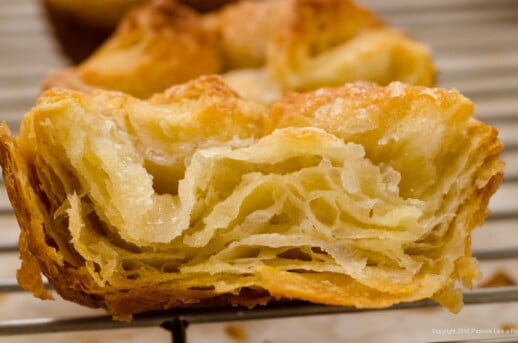 In the coming months, I am going to be featuring articles on laminated doughs.  While they have  a reputation for being difficult, the newer method of making them has taken a lot of the fear away.  It used to be that we were told there couldn’t be a single tear in the dough or the butter would all leak out or the layering of dough would suffer.  Well this easier method has the butter and detrempe or dough package cut up in little pieces, and then shoved together and rolled out.  No more worries.  This post will serve as a foreward to these individual posts.

Laminated dough refers to a baking technique in which many thin layers of dough, referred to as leaves, are separated by butter, as a consequence of repeated folding and rolling. There are different types of laminated doughs. Puff pastry, croissant, and Danish are the three original laminated doughs. Kouign Aman and cronuts are variations of one of those.

Croissant and Danish contain yeast, puff pastry does not. In addition, the initial dough or detrempe for Danish contains egg which the others don’t. A recent addition to laminated dough is the cronut which is basically doughnut dough that is laminated with butter. Kouign aman is a croissant type dough that is sugared when shaping producing a crackling caramel sugar coating. It can be filled or unfilled. I will blog about this one shortly. The photo that opens this blog is of the Kouign Aman.

Croissant or puff pastry can be savory as well as sweet.

Laminated doughs are often thought of as difficult or scary to attempt. Originally, lamination occurred when a lean dough (one with no or little fat) was rolled out and a butter block was encased in the dough. It was then rolled and folded several times to obtain a great number of thin layers of dough and butter. These are referred to as “turns”.

However recently, a much easier method is being used. I first introduced making puff pastry in a food processor in my first book, “The New Pastry Cook”. It was based on the Dutch system or  Scottish method of making puff pastry in a mixer which was introduced to America by Julia Child. Using a mixer allows you to use refrigerated cold butter. As a result, Julia cautioned not to use the processor for her method – and she was correct.

However, one simple change allows puff pastry or laminated doughs to be made in the processor. Freezing the butter and partially freezing the detrempe makes it possible to use the food processor. It has been interesting to see how many books and articles are now using this method or some variation of it. I was surprised to see the Culinary Institute of America’s “Baking & Pastry, Mastering the Art and Craft” now uses the Dutch system or Scottish method of making puff pastry in the mixer as opposed to the original butter block method which was always favored by pastry schools and professional pastry chefs.

There is another method of making puff pastry which is called inverse puff pastry. This is where the detrempe is on the inside and the butter is on the outside. There is an excellent article at http://www.chefeddy.com/2011/03/inverse-puff-pastry/.

Butter as used in Laminated Doughs
Butter is the preferred fat for incorporation because of its taste. However, any fat from lard to Crisco can be used, but isn’t suggested for reasons of taste. Vegetable shortening will give the highest rise and is used commercially in some ready to use puff pastry in supermarkets. But the lack of taste along with the coating it leaves in the mouth makes it undesireable.

It stands to reason that the higher the butter fat content the higher the laminated dough will rise when baked simply for the reason that the more fat there is, the more steam will be created as it melts  and releases its water in order to lift the dough. For this reason European butters such as Plugra, Kerry Gold and others are often recommended as they have an 82% butterfat content whereas most national brands of American butter contain 80% butterfat as mandated by congress.  I will be writing a post comparing the butters.

While yeast aids in lifting croissants, kouign aman, cronuts and Danish pastry, puff pastry is  completely dependant upon the steam produced by the water in the dough and in the melting butter to raise it.

Flour used in Laminated Doughs
Flours can vary depending upon what laminated dough you are making.  Generally speaking if the dough uses yeast, the flour is bread flour which has a high protein count making it possible for the item to retain its height while the heat sets it.

My recipe for puff pastry uses pastry flour that I make by combining all purpose and cake flour. However, I recently heard Paul Hollywood of The Great British Baking Show, mention that strong flour (bread flour in America) should be used.

However, Rose Levy Beranbaum in her book, “The Pie and Pastry Bible” thinks bread flour is not such a great idea for puff pastry.

Stay tuned for my butter and flour tests using European and American butters as well as the traditional pastry flour and bread flour.

Rolling out the Dough
There is a special rolling pin called a tutove for rolling out laminated doughs. However, I don’t make them often enough to worry about it. I use my marble rolling pin on my marble tabletop. Marble is the best surface because it stays cold which helps keep the butter cold. The least desireable surface is wood. However, just pop the laminated dough into the refrigerator or freezer for a few minutes if it warms up too much.  Just keep it firm.

Originally puff pastry was rolled and folded in what was referred to as a single turn. That meant it was folded like a letter. The method I use is the double turn which means the dough is folded down from the top to the center and up from the bottom to the center, then folded in half at the center. This speeds up the process of rolling out and making turns. It is then turned 90° so the folded side is to the left for the next turn.

Storing Laminated Doughs
When the dough is completed, it is best to leave it in the refrigerator overnight or up to several days. If not using it then, freeze it for up to a year for unyeasted doughs. Several months for yeasted doughs. Thaw it in the refrigerator overnight before using if frozen.  The product can also be made up and frozen then baked from the frozen stage.

Also, if using cutters, do not twist them when cutting. Cut straight down and remove them straight up to keep the pastry from baking lopsided.  If you are unsure the cut has gone to the bottom, move the cutter side to side.

If you need to attach pieces of dough together, brush them with water and press them together lightly. I prefer this to egg as the egg can seal the pastry if it drips down but water won’t. I often glaze the finished product with an egg wash, but I don’t attach pieces with it.

Scraps
Although scraps of laminated doughs will never reach the height of the original, they are still eminently useable. I usually piece mine together or stack them up, dust them lightly with flour and roll them out. If they soften, refrigerate them. Give them a turn, wrap them in film and refrigerate or freeze them.

Baking Sheets and Baking Temperatures
Light colored baking sheets lined with parchment paper should be used when baking laminated doughs. The high butter content can cause the items to burn fairly fast. Dark sheets brown more quickly and that is not what you want here. Also, I double pan all of the laminated doughs  to insure the bottom is not burned before the item is baked all the way through. I also bake on the middle rack of the oven to prevent burning the top which can happen if baked higher up in the oven.

Baking temperatures can be anywhere from 350°F to 425°F depending upon what is being baked. Some recipes, especially if the laminated dough is thick, start at a high temperature to get the maximum lift to the dough and then reduce the temperature to make sure it bakes all the way through. Follow the guidelines in the recipe.

Serving
When cutting laminated doughs to serve, use a serrated knife in a sawing motion to preserve the layers and not squash them. It is the exact opposite of cutting the dough before it is baked.