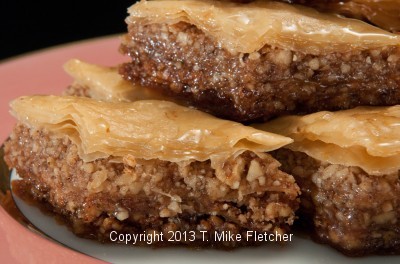 My mother was a fantastic baker and cook.  She could take nothing and make something wonderful from it.  Unfortunately, I didn’t appreciate it when I was growing up.  They practically had to force feed me like those poor geese for foie gras.  But what I did love, was anything my mother baked and is why, in hindsight, I went into the baking business.

My mother and grandparents were immigrants from what was then, Yugoslavia.  Just as in this country, different parts of the country had different assets.  Mother lived in an area rich in dairy with butter, eggs and cream at their disposal.  I would watch my mother and grandmother on Sunday’s, spread a clean, white tablecloth over a large, round table over which freshly made phyllo would be stretched.  I could scarcely understand a word as they chatted away in Serbian.

My job was to sweep up the scraps after the thick edges were removed and some of the paper thin dough fell to the floor.  While most people can’t imagine a dough being stretched so thinly a newspaper could be read through it, I thought everybody made it.  After it had been stretched to transparency, a spoon would be dipped into melted butter and I can still see my mother and grandmother  holding it  high and waving it over and over  the transparent dough as the golden drops of liquid fell from the spoon dotting the surface.  It would then be folded upon itself and more butter would be drizzled. END_OF_DOCUMENT_TOKEN_TO_BE_REPLACED