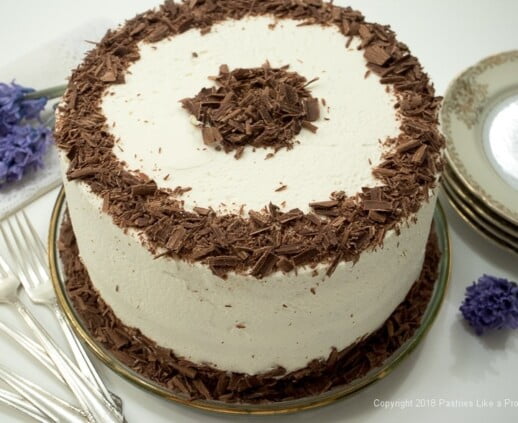 This Raspberries and Cream Cake comes from the bakery's wedding cake file.  It was a favorite spring and summer cake.

The white chiffon cake is very tender.  We made it the day ahead, cooled it in their pans and covered them with foil or froze the covered layers if using later.  I use gloves when releasing the cakes as the will be a bit sticky on top.  The cake is filled with whipped cream and fresh raspberries with a whipped chocolate ganache in the middle layer.

This ganache is really interesting.  it was one of the few things when it came to baking I could not change.  It must be made at least a day ahead or it simply won't whip.  It can be made a week ahead and refrigerated if desired.  It was almost as if it had a mind of its own and simply wasn't going to change for me!

Thie entire Raspberries and Cream Cake can be made in stages and put together the day before serving as long as it is refrigerated.  At the bakery, we finished the cake with an Italian Buttercream. Here I have altered the finish to whipped cream to keep the cake as light and easy as possible.

It is important to use heavy cream for this recipe.  It needs no stabilization as the heavy cream whips up to a thick, fairly heavy finish.  We used this finish for several cakes at the bakery and froze them.  They thawed perfectly with no watering out as the regular whipped cream does.  This is because the fat content of the cream marked heavy cream is higher than the cream labeled whipping cream.  I have seen methods of fortifying plain whipped cream but they will alter the inherent texture and taste finished whipped.  Heavy cream has become pretty available in most areas, so if you can find it use it for sure.  I used Tahitian Vanilla when whipping the cream but any vanilla is fine.

Raspberries and Cream Cake is perfect for Mother's Day.  It is light, luscious, pretty, not too sweet and altogether a perfect celebration cake.

It is necessary to make this at least a day or up to a week in advance. 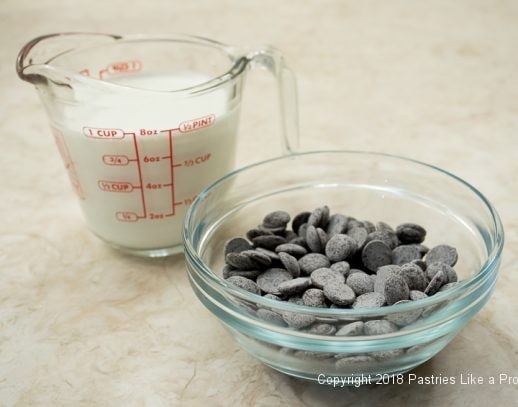 Combine the cream and chocolate in a small heavy pan. Heat, whisking constantly until the chocolate is completely melted. 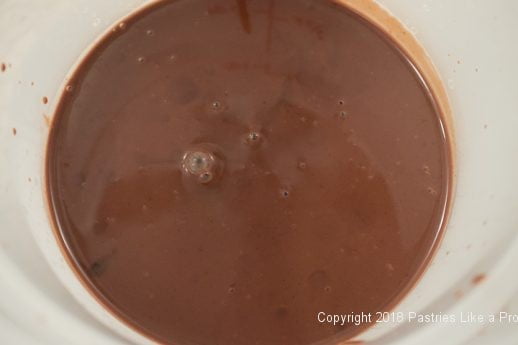 Pour into a storage container and cover the top of the ganache with film. Cool; store in the refrigerator. 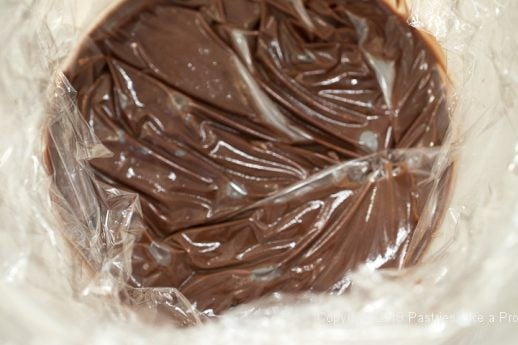 Line four 9” round pans with parchment.  Spray center of paper only.  Do not spray sides of pans.  Preheat oven to 325 degrees.

Place the water, oil, yolks and extracts in a mixing bowl. Sift together cake flour, ¾ cup sugar and baking powder; add to the mixing bowl.  Mix on medium speed of mixer for 2 minutes.

In a clean mixer bowl fitted with the whisk, place the egg whites and cream of tartar.  Beat until soft peaks form; gradually add the remaining ¾  cup of sugar and beat until medium peaks form.

Divide batter evenly between the four pans (270 grams or 9 ½ ounce per pan).  Spread evenly.  Bake for 13 to 15 minutes or until the centers spring back when lightly touched. While the layers should not pull away from the side of the cake, they will upon cooling.  I have no idea why they do this, they just do.

Note: The layers can be made, cooled and frozen with waxed paper between the layers.  Wrap securely and freeze up to one month.  Thaw completely before filling and finishing.

Combine the ingredients in the bowl of a mixer.  Using the whisk attachment, whip until stiff.

Place the chocolate ganache in a mixer bowl and 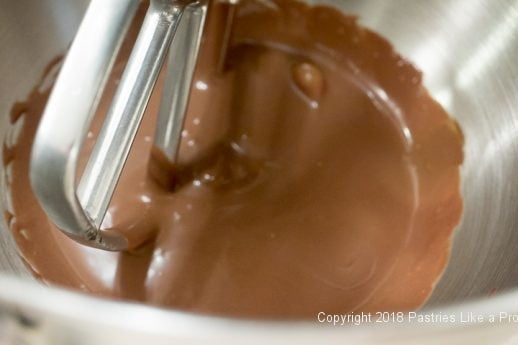 beat with the paddle attachment until stiff enough to hold its shape.  However, do not overbeat or it will become granular and unusable.  Set aside. 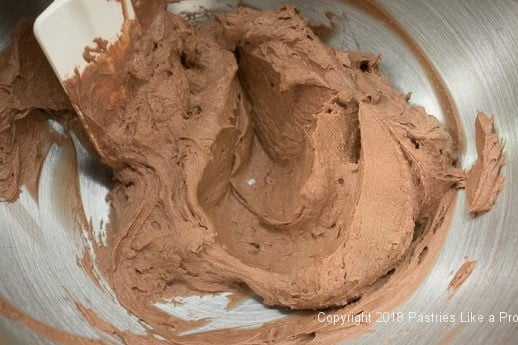 Place one layer of cake on a cake board or cake plate.  Spread a thin layer of whipped cream on top. 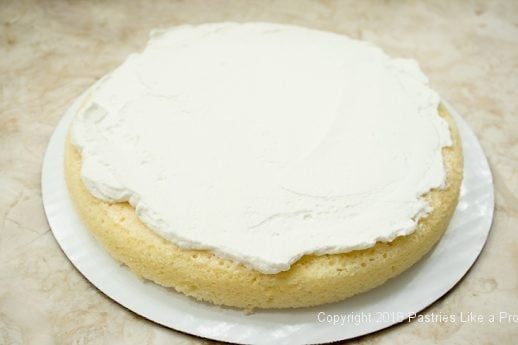 Place the raspberries in circles on top of the cream, pressing down slightly to seat them. 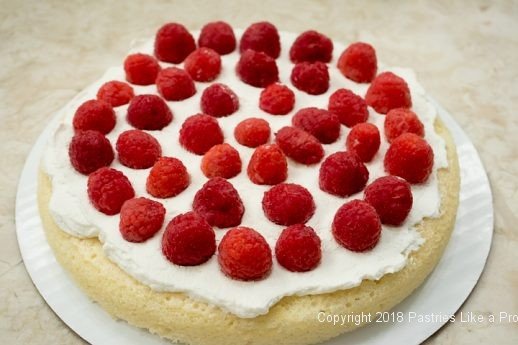 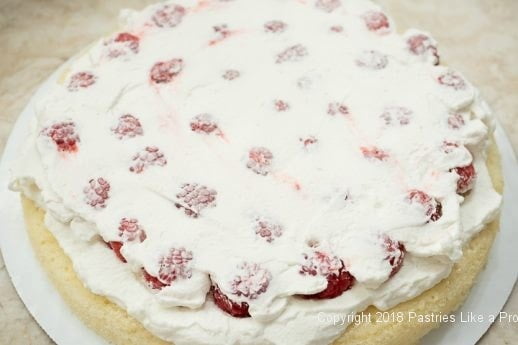 Place the second layer of cake on top of the whipped cream and spread the chocolate ganache evenly over this layer. 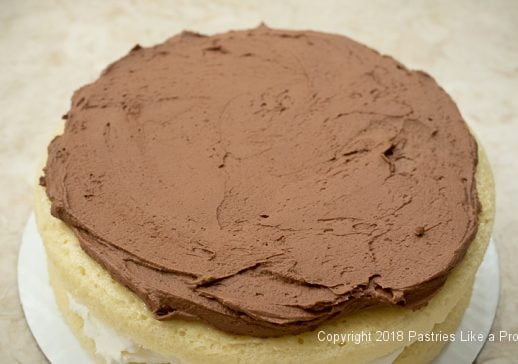 Cover with another layer of cake, repeat the whipped cream and raspberries, 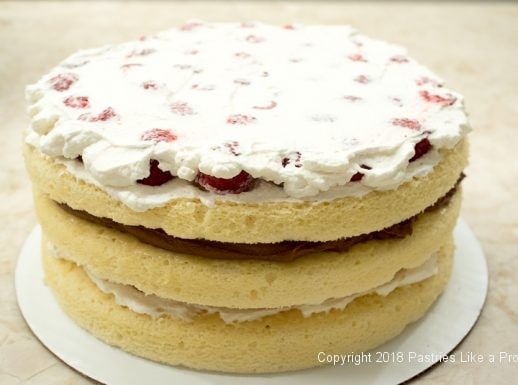 finishing with the last layer of cake. 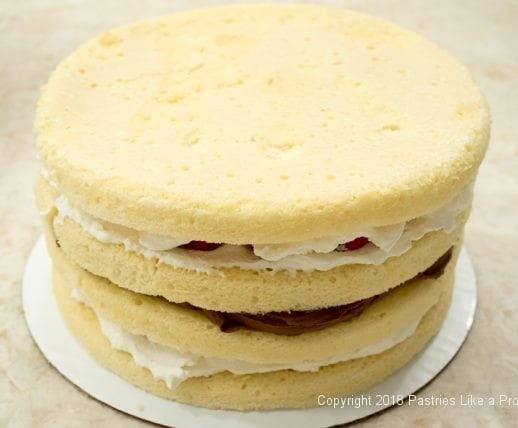 The cake will most likely be uneven due to the differing sizes of raspberries.  To correct this, place a piece of waxed paper or film on the top cake layer. 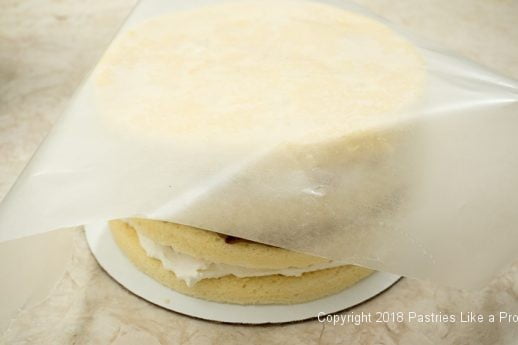 Place a cake pan on top and gently press down.  Do not apply a lot of pressure or you can split the layers. 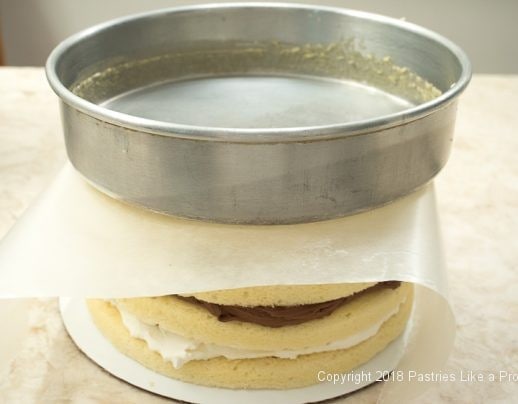 Finish the sides and top of the Raspberries and Cream cake with whipped cream.

The cake can be finished with more raspberries in the center or as I did by shaving a bar of milk chocolate with a vegetable peeler.  Finish the top and bottom edges of the cake as well as placing a little pile in the middle.  Use gloves when shaving and applying the chocolate as it will melt under the warmth of your hands.

The Raspberries and Cream cake, in its entirety, can be made the day before and stored in the refrigerator. 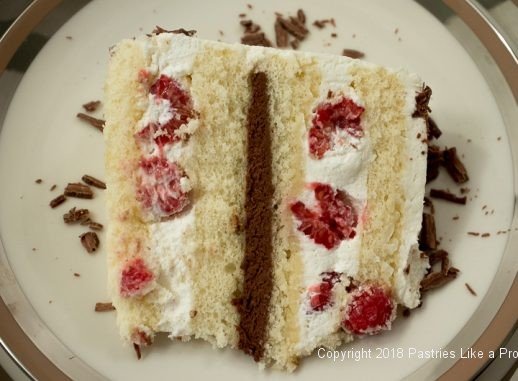