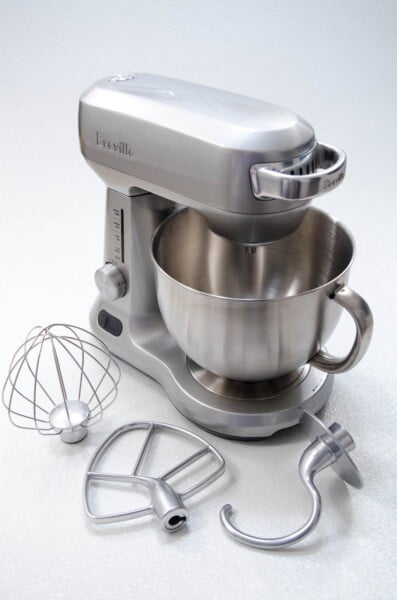 There’s a new stand mixer in the kitchen and its name is the Breville mixer. It’s sleeker, quieter, more powerful and all- around a better mixer than the KitchenAid as far as I am concerned and I have been baking professionally for over 30 years.

I never thought I would buy anything but a KitchenAid stand mixer. I remember well first seeing a lift bowl KitchenAid K5A on Julia Child’s TV show. I was just beginning to realize that food was to be my career with the emphasis on baking and pastry. It helped that Julia was able to teach so well – and I devoured every word and every recipe. Not only was she able to bring a whole new food culture to America but she did it in such a way that she was able to make you believe you could do it too. She was my first teacher and she lit a fire inside that still burns today.

At the time there was no internet, no easy way to find information. I finally tracked it down and I remember being horribly upset because it was so expensive and I couldn’t afford it. Shortly thereafter my husband came into a small inheritance which he was happy to share. I used my cream colored K5A until just recently when I finally came to terms with the fact that I had to let it go. I used that mixer more than normal – much, much more than normal and it never ever let me down. I bought an extra bowl, whisk, and paddle beater so I wouldn’t have to wash the bowl when two were needed to complete a recipe. END_OF_DOCUMENT_TOKEN_TO_BE_REPLACED