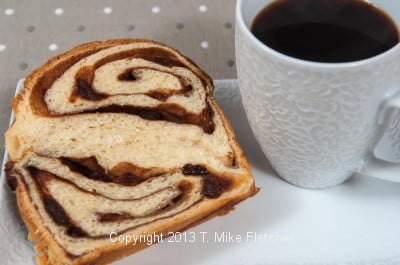 This is truly a Cinnamon Raisin Bread to be proud of.  Based on my Basic Sweet Yeast Dough, it is tall, tender and terrific.

So my task was clear.  Make a better cinnamon raisin bread – and I took this very seriously.  There is nothing I like more than working with yeast breads.  There is something magical in combining ingredients and watching them grow.  Several years ago I wanted to come up with my quintessential sweet yeast bread.  I used honey for sweetness and instant mashed potatoes to keep it soft for days.  Vanilla is used to enhance the flavor and the basic dough is used in more than a dozen sweet yeast bread and roll recipes, some familiar and some new. END_OF_DOCUMENT_TOKEN_TO_BE_REPLACED