That might have been one of my biggest misconceptions in pastry.  As I began researching, I found no one agreed on a number of details.  Among the problems were the meringue separating from the shell after it was baked, the pie getting watery after cutting, and the meringue "weeping".

Most recipes recommended putting the meringue on while the filing was hot, making sure it was attached to the crust.  It seems everybody agreed on that.  Finishing it in a 350°F oven for 10 to 12 minutes to brown it was also pretty much the norm.  So that was test #1.  The results were less than desirable.  The meringue separated and the tart got very watery after refrigerating it.  The soggy crust was a real turn off!

A lot of people quoted Alton Brown who can dispense some really bad information.  His theory that putting the meringue on the filling when it was hot would partially bake the meringue.  Now there is a misstatement for the ages!  The first thing to realize, is that no matter what you do meringue does not bake.  It either stays soft as in the topping for Baked Alaska and Lemon Meringue Pie or it is dried out in the oven as in a Pavlova shell or meringue cookies.  The top may brown but it never bakes through.

The sugar allocated to the meringue in most recipes was between ⅓ to ½ cup to 4 egg whites. In my second test, I used ½ cup sugar (100 grams or 3 ½ ounces) to 4 egg whites.  However, this time I decided to put them on a chilled filling.  Big mistake!  I covered the filled crust with film and refrigerated until it was cold.  However, it condensed and no amount of patting it with paper towels dried it enough to keep the meringue tight to the filling.

So at this point I started researching some more when I came across an answer to the question, "How do you keep meringue from pulling away from the sides of a pie after it is baked?  The person answering the question was Takamo - no kind of address so that is all I can tell you.  His answer was directly opposed to most of the information on the internet or in cookbooks, but it works.  His reasoning is spot on and it was wonderful to find something that I had been thinking about.

Then, the meringue, when made should incorporate cream of tarter which is often left out during its preparation. This stabilizes the mixture and prevents the egg whites from separating. Also, excessive whipping can cause the meringue to separate, as does an inaccurate amount of sugar added to the egg whites. Here is a recipe for meringue: Rule of thumb: one cup of sugar for every 3 large egg whites. (for medium sized eggs, use four eggs and for jumbo sized eggs, add ¼ cup of sugar) Rule of thumb,: ¼ teaspoon of Cream of Tartar for every 3 egg whites. (for meringue only) Egg size in this case doesn't matter. 1 teaspoon of vanilla for every cup of sugar.

The whipping time varies. Room temp, size of eggs and speed of mixer are dependent on how fast the eggs whip. Always start on a low speed until the eggs start to foam. Then finish on medium speed. High speed on the mixer causes the egg whites to separate and the formation of the meringue can occur too quickly and control of the meringue is lost. The idea is to slowly incorporate air into the mixture, not breaking down the egg whites. The chemical properties of the sugar are what "cook" the egg whites. Not heat.

During the browning stage of the meringue, the oven will tend to cause the sugar to further absorb the moisture from the eggs and cause it to become "syrup-like" Low temps on the oven are the culprit. Pre-heat and set your oven to "broil" then place the pie on the shelf lowest to the heating source. With the door open, watch the pie brown. It only takes a minute or two to do so. If you have to, rotate the pie for even browning and quickly remove it. Allow it to cool to room temp before putting it in the fridge. In a professional kitchen, I some times use a propane torch to brown the tops, but it takes a skilled hand. Source: La vie du Boulanger, Marcel Neau cir;1984"

So I tested his version also - #3.  I agree with much of what he says but disagree with his egg white/sugar ratio.  The meringue is simply too heavy.  One of the important standards of a good lemon meringue pie is that it be topped with billows of meringue.  Three egg whites and 1 cup of sugar does not produce billows.  I also found the sugar would not completely dissolve in the egg whites.  I beat it for over 10 minutes on medium as Takamo suggested but a grittiness from the sugar was still there.

Summing Up The Lemon Meringue Pie

First, It is important to cover the lemon filling with film after being made and poured into the shell.  Then allow it to cool at room temperature.  At this point and not before,  the meringue is added.

Second, using 4 egg whites from size large eggs and 1 cup of sugar (200 grams or 7 ounces) is a two to 1 ratio by volume producing the high meringue requisite to this Lemon Meringue Pie.  To insure the meringue does not pull away from the crust it is best to pipe it in a circular motion starting at the inside of the exposed crust.  I piped several times building up the meringue for an attractive look.  I know some recipes spoon the meringue onto the crust  but I think that is leaving open the possibility of not attaching it to the crust all the way around.

Third - the final important point is to brown it under a preheated broiler.  This prevents the sugar in the meringue from becoming too hot as it will in a lower temperature oven baked for a longer time.

Following these rules for this Lemon Meringue Pie, the meringue will stay attached for days in the refrigerator with no weeping either on your part or the part of the meringue and without the filling becoming watery if it is kept for several days.   Even after I left the pie in the refrigerator for four days the meringue did not separate nor did it "weep" which is also caused by slow browning of the crust.  The filling did not become watery so the crust stayed crisp.

Lemon Meringue Pie is an American classic and with good reason.  This recipe addresses weeping, wet fillings, and sliding fillings while keeping all the things that make this a great dessert

Pie Crust - go here for how to photos 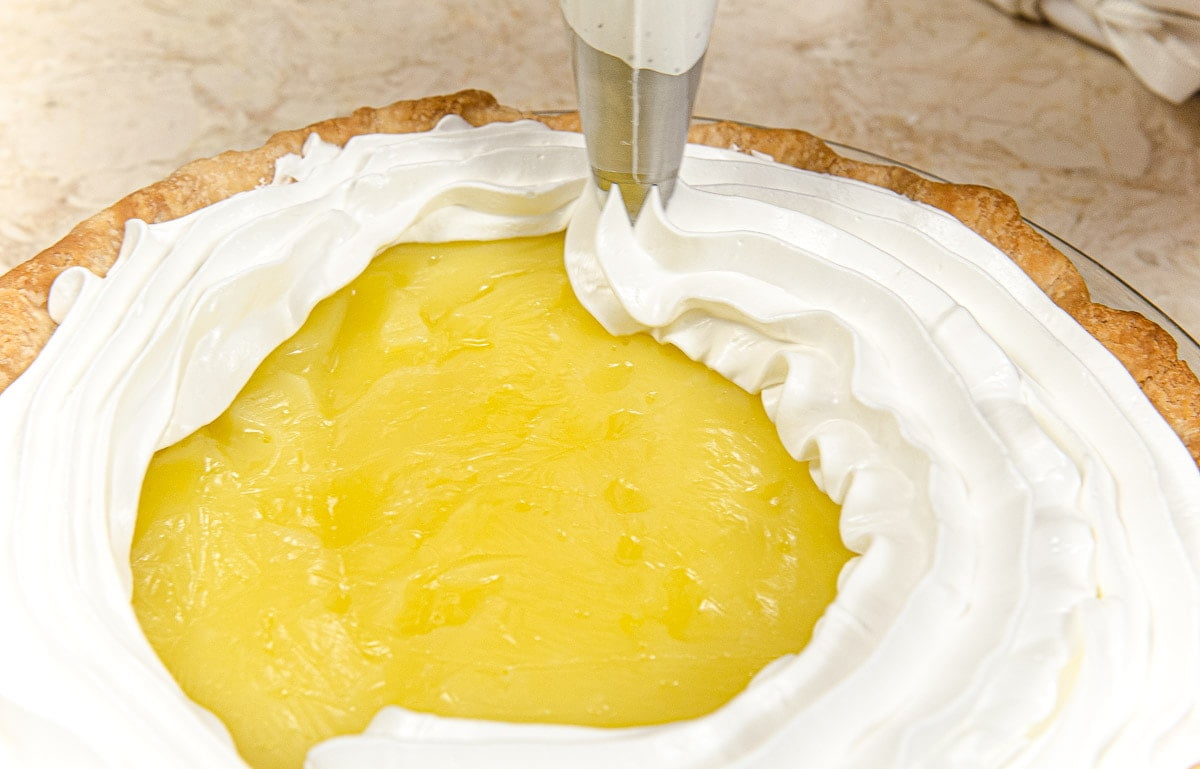 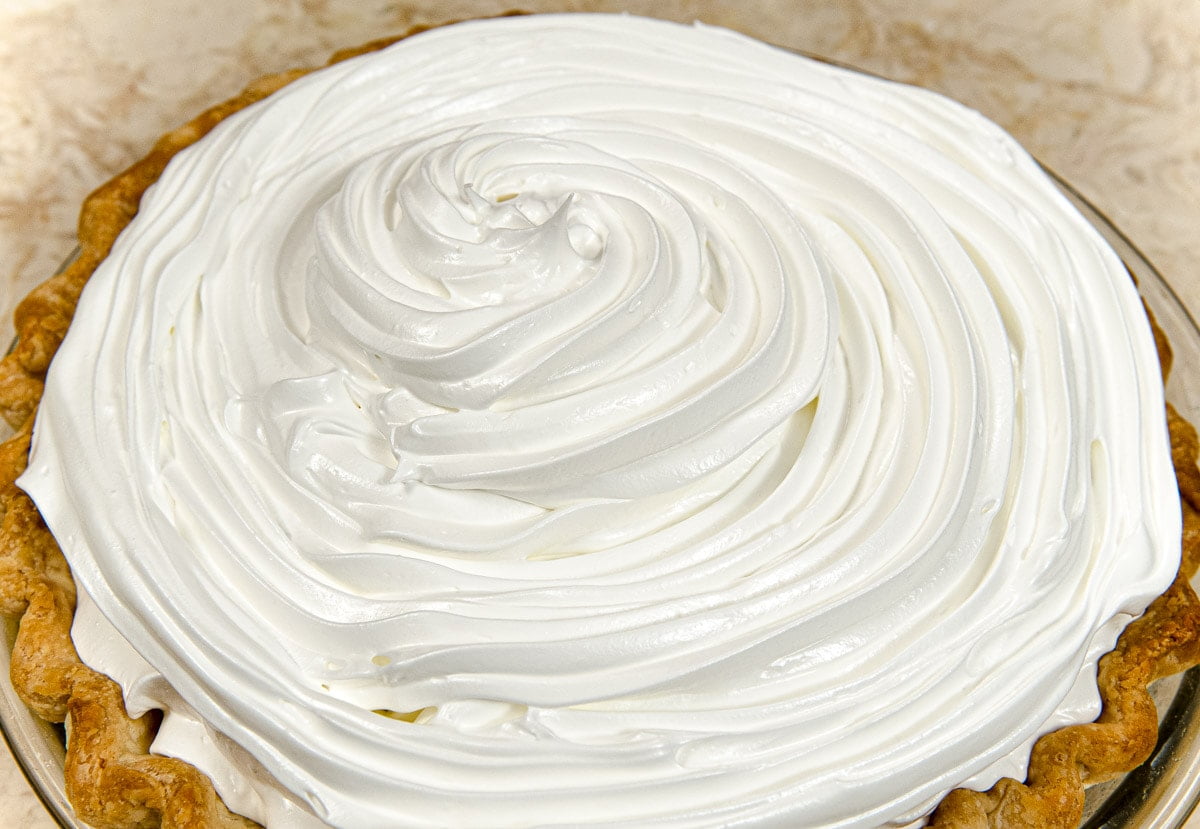 This pie will keep in the refrigerator for up to 4 days with no weeping, sliding, getting wet, etc.