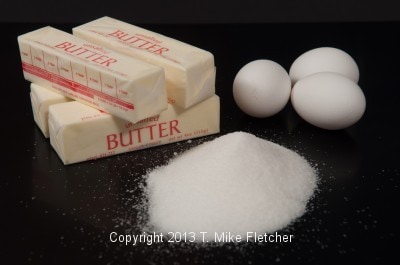 Italian, Swiss and French buttercreams have long been the finish that defined upscale cakes and wedding cakes. The Italian and Swiss buttercreams get their name from the type of meringue on which they are mounted.  They have also been one of the most feared techniques in pastry making.  But I don't know why!  They mainly consist of eggs of some kind, sugar and butter.  Although they do require more steps than the traditional American powdered sugar based frosting, the result is a smooth emulsion that literally melts on your tongue.  In the next few blogs, we are going to look at, not only the Italian, Swiss and French buttercreams, but also one based on creme anglaise and the American frosting, while sometimes a buttercream and sometimes not. I reserve the word buttercream for finishes using actual butter, not margarine or a plastic shortening like crisco.  Those are frostings to me.

The Italian, Swiss and French buttercreams are all emulsions where the butter is suspended in  some form of egg, be it whites, yolks, whole eggs or a combination.  They also have a cooked sugar syrup in common.  While some consider the egg white version to be less stable than a French buttercream which employs whole eggs and yolks, we used the Italian Buttercream almost exclusively for our wedding cakes and never had a problem with it.  Considering I live in St. Louis with our notably changeable weather, some considered this quite a feat.  It could be 100 degrees in the summer and 18 degrees in the winter.  But what I found is that the buttercreams have nothing to do with the weather when making them.  It all depends upon cooling the egg mixture after the sugar syrup has gone in and adding the butter at the correct temperature in small enough amounts that the whites can absorb it before you add more.  This works with all three of the main buttercreams.  It goes without saying, the room in which they are made cannot be 100 degrees, although we certainly made them in 80 degree rooms at least.  Despite  having air conditioning, the makeup room held the mixers and 4 large, commercial ovens.  When all of the ovens were going and it was summer - well, use your imagination!

I have read that some people substitute a portion of crisco or a like solid shortening (about ¼ to ⅓ depending upon the person suggesting it) for part of the butter in the Swiss and Italian buttercreams to help stabalize them in hot weather.  In fact one of my favorite pastry book authors, Bo Friberg has suggested this.  Having made and used Italian buttercream for over 30 years in all kinds of heat, I have never used this method as I wouldn't want to dilute the taste of the butter.  All of our wedding cakes were finished one or two days before delivery and stored in the refrigerator.  If the cakes are left at room temperature in a hot environment overnight, I can imagine you could have problems.  Refrigeration is key here.  After delivery, as they sit on the table for several hours before serving, they will be perfect when eaten.

As the years went on in my bakery, I employed different people to finish the cakes.  This was never my forte and I was happy to turn it over to people more qualified than myself.  Many of them had used the traditional American frosting and all thought the Italian buttercream so much easier to use than either the American or purchased buttercreams.

The lightest buttercream is the Swiss but the Italian buttercream is thought to be more stable, although I know a lot of cake people that use the Swiss because it is easier.  The French buttercream is heavier, but very luxurious.  In fact, I much preferred this one when it came to coffee buttercream.  Nothing can get close to it, even if you don't like coffee!

I have never made or used the creme anglaise buttercream, so this will be interesting for me also.

We used the American buttercream for the few cakes that required buttercream when sending them to restaurants. The Swiss, Italian and French buttercreams must be served at room temperature and restaurants were loath to making sure they were served as required.  What I learned in all the years I supplied them, was they wanted the desserts easy to serve, preferably from the refrigerator.

Flavoring is a key component in any of these.  When I first started teaching baking and pastry at a community college, I was surprised to hear the students dislike of buttercreams.  They couldn't tell me why except they just hated it.  You can imagine my dismay as I based my entire wedding cake business on really good cakes and fillings with Italian buttercream as the finish.  So I looked at the text they were using and the answer was crystal clear.  No flavoring was specified.  Not even a suggestion of flavoring made.  Well, I agreed with them!  No buttercream, lacking some flavoring agent is going to taste like anything other than well, sweetened butter.  And it is not very exciting!  What made our buttercream so beloved was the sheer amount of flavoring I put in mine.

So, to finish the story, I made them a cake with French buttercream on the inside (coffee, of course) and Italian on the outside.  After one bite, they were all diving into the extra containers of the two buttercreams I brought.  There whole idea of what buttercream tasted like had been turned on its head.  That's the reward of teaching!

The other key component to a light buttercream, is to beat it enough after the butter is added to lighten it.  Otherwise it will be heavy and a bit waxy.

This Thursday, we will make the Swiss and Italian buttercreams as they are so closely related.

The following blogs will disscuss, French, the Creme Anglaise based buttercream and American buttercreams as I used them in my bakery.

Do let me know your experiences with buttercreams, good or bad.  I know what worked for me but there are other good ideas out there and I would love to hear about them.

More recipes you may enjoy