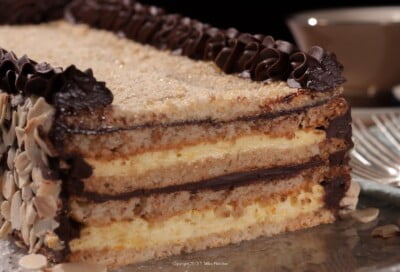 Ahhh, Marjolaine (pronounced  mar zjoh lenn).  Fernand Point, was a French restaurateur and is considered to be the father of modern French cuisine according to Wikipedia and other sources.  At his three Michelin star restaurant, La Pyramide, he trained many of Frances most influential chefs including Paul Bocuse, Alain Chapel, Louis Outhier, Georges Perrier and Jean and Pierre, the Brothers Troisgros.

One of his signature dishes was the Marjolaine and it seems it took him years to perfect.  A combination of nutted meringues, pastry cream, and a hint of chocolate.  As with any classic, there are a number of variations some of which include cake layers and German Buttercream.  I used a lightened version of pastry cream and a sour cream ganache instead of making creme fraiche.  While the original recipe added the almond praline to one of the pastry creams, I used it to finish off the top where it adds a pleasant crunch and doesn’t get lost. END_OF_DOCUMENT_TOKEN_TO_BE_REPLACED