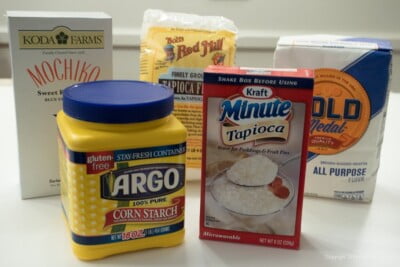 I have put together a compendium of thickeners to help you better understand which works where, if it does or does not freeze and the look of it after it has thickened.

Although both thickeners and gelatin will thicken an item, thickeners are used in cooked items while gelatins are used to thicken cold items.  Gelatins are often added to hot items that will gel upon cooling.  Please see my post, Understanding Gelatin.

My favorite thickener for pies is actually a combination of two that we used at the bakery. By using minute tapioca or tapioca flour or starch and flour in equal proportions, the problem with stringiness of tapioca used alone can be avoided while a clear, jewel-like finish is achieved The pie can also be frozen and thawed without weeping or degrading.   The fruit is soft set but not runny.  See the American Pie Crust Tutorial for the Very Berry Pie at the bottom of the recipe.  (Put that in pies)

Judging the amount of any thickener for fruit pies is tricky. I have seen charts with a number of different thickeners to be added to pie fillings.  But they don’t take into consideration the amount of liquid the fruit has released or will release in the heat of the oven.

The thickness of the final result must also be factored in. Milk and water have different viscosities which means they last different amounts of thickeners.  Allowances must also be made determined on whether the final thickened product is to be thin, medium or thick as in sauces.  Frozen fruit usually exudes more liquid than fresh. Really ripe fruit will yield more liquid than just ripe fruit. Each will take a different amount.  I can only suggest that you follow whatever recipe you are using as it is written.

While we are on the subject of fresh or frozen fruit, I can tell you we used frozen fruit at the bakery for several reasons.  We made deep dish tarts all year long.  These were essentially pies but with a crumb topping.  Fresh fruit is not always available all year long and if it is the expense is exorbitant and the quality not always the best.  Even in season some years produce bad produce.

Frozen fruit is packaged when in season already peeled, seeded, etc.  When you need thirty pounds of fruit for ten pies, it is simply too time-consuming to do all the prep.  Last, I could control the amount of juice going into the tarts and as such every batch would be consistent.

There is a stigma against using frozen fruit that I don’t understand.  When I would take samples to potential clients, I would never mention the product had been frozen until after they tasted it.  Not a single client or chef ever could tell the difference unless I told them because there was no difference.  Nor did our retail clientele.

If planning to freeze a product use arrowroot, tapioca, sweet rice flour, or Instant ClearJel™.

For a sparkling clear finish, tapioca, rice or potato starches are best.

Arrowroot is the powdered root grown in the Caribbean.  It is used to thicken glazes, fruit fillings, and puddings and has a glossy finish.   Arrowroot thickens at a lower temperature than cornstarch or flour making it ideal for thickening products that should not boil. It is added at the end of cooking after mixing it with an equal amount of water. Add it to the hot liquid for about 30 seconds.

It can be substituted for cornstarch but in a lesser amount. Using it with dairy products is not recommended as it produces a slimy texture.  Products thickened with arrowroot can be frozen and thawed with impunity.  Sweet Rice Flour can be substituted.

Cornstarch is derived from the endosperm of the corn kernel and as such is a grain.  Its uses include thickening glazes, fruit fillings, and puddings. When fully cooked it is almost transparent making it ideal for pie fillings to show off the jewel-like colors. It has twice the thickening power of flour.  Cornstarch cannot be used with acidic liquids.

Unfortunately, products using cornstarch cannot be frozen as it breaks down and becomes watery when thawed.

It should be combined with an equal amount of cold liquid or water and stirred into the hot filling at the end of cooking.  The filling should be brought to a boil and cooked for 2 or 3 minutes to disperse the starchy taste.   However, it breaks down when cooked too long or stirred too vigorously.

Flour should not be used with acidic liquids.  It should be combined with an equal amount of water before adding it to other ingredients or it will lump up in the finished product. Products thickened with flour have a cloudy finish so it is best used in puddings and gravies or wherever a clear, shiny appearance is not necessary. It is also one of the weakest thickeners since it is not a pure starch. While cake flour has the most thickening power, and bread flour the least, all-purpose flour is most used.

Instant ClearJel™ is a modified starch that thickens without cooking. It should not be confused with Clear Jel.  Instant ClearJel™  works well with acidic ingredients and can withstand high temperatures.  It is freezer stable and is ideal for use in fruit pies.  Instant Clearjel™ is transparent and shows off fruit fillings beautifully which is why it is also used commercially for pie filling.

One of the best uses is for instant fruit pie fillings where it is used to thicken the filling without cooking and before it is poured into the crust.

It should be thoroughly blended with sugar or other dry ingredients before it is added to liquids in order to prevent lumping and to ensure smoothness. The presence of sugar acts to control the rate of the hydration of the starch.

Potato Starch can be substituted for cornstarch with better results.  It thickens at 176°F leaving no unpleasant taste and should not be boiled or it can break down.   Potato starch can break down if it is vigorously stirred or overcooked. Whisk with an equal amount of cold liquid adding it before the mixture begins to simmer but is very hot. If reheating a sauce, do not bring it to a boil.  It is also an accepted thickener for Passover and is most commonly found with kosher ingredients.

Sweet Rice Flour or Glutinous Rice Flour contains no gluten. The word Glutinous refers to short grain, sticky rice which, when cooked, becomes sticky or glutinous.  The rice flour can be added to a hot product directly.  It should be added at the end of cooking and has a very glossy finish.  I have used it in pastry cream and it was the best pastry cream I ever had.  I used my pastry cream recipe substituting the sweet rice flour for regular flour.  This also makes the pastry cream gluten free.

It is substituted in equal amount for flour.  Do not use regular rice flour.

Tapioca can be substituted for Sweet Rice Flour.

Mochiko is a very popular brand.  It can be easily found in Oriental grocery stores.

Minute Tapioca™ and Tapioca flour come from the South American cassava plant.  The minute tapioca does not dissolve completely.  The small particles become translucent and soft but can often be seen. If this is a problem, use tapioca flour also known as tapioca starch.  Products made with tapioca can be frozen because it will not break down when thawed. Tapioca has a glossy finish.  When using Minute tapioca for pies it should be mixed with the other ingredients and allowed to sit for 30 minutes to soften. The only downside of tapioca is its stringy quality when cooked which is why I mixed it half and half with all purpose flour.

Add to hot liquids at the last minute because it breaks down with heat faster than potato starch and a lot faster than cornstarch.

Substitutes include sweet rice flour and potato starch if not freezing.

The following sources were used for research:

The Professional Pastry Chef by Bo Friberg
Baking and Pastry, Mastering the Art and Craft by The Culinary Institute of America
Understanding Baking by Joseph Amendola and Donald Lundberg
How Baking Works by Paula Figoni