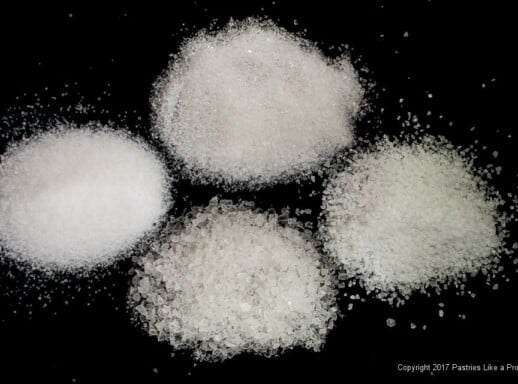 I had another blog planned for this week but several people have commented about salt in their recipes.

After thinking about it, it occurred to me that there are different types of salt and some are "saltier" than others.

Salt enhances the taste of most foods to which it is added. For instance, stew without salt would be bland and not very tasty. Bread without salt would be equally bland and uninteresting. In fact, salt is an important factor in keeping yeast from going wild in bread baking. It also, attracts water, adding moisture to the bread.

There is a distinct difference between salted and unsalted butter in more ways than one. The most noticeable difference in taste. Unsalted butter has the clean taste of only butter. Salt alters the taste of the butter but it is not right or wrong.

I use unsalted butter in my baking because I want to control the amount of salt being added to the recipe. In some cases, such as shortbread and European butter cookies, no salt is added so using salted butter would alter the taste.

However, in a pinch, if all you have is salted butter, reduce the salt called for by ¼ teaspoon per stick of butter.

I digress. Back to the subject at hand.

There are many salts and it seems more are coming all the time. Some are better for baking than others and some are "finishing salts" which are added when served.

The most succinct description of salts comes from thespruce.com "Today there are three main methods for obtaining salt: Evaporation from sea water, mining salt from the earth, and creating salt brines. Most common table salts are a product of salt brines, and salts used for industrial purposes are obtained through mining, while specialty or gourmet salts are still produced via evaporation of seawater". It's an article worth reading.

According to Serious Eats, "A cup of table salt will have twice the salting power of a cup of Diamond Crystal kosher salt." In addition, they provide a useful chart for determining the strength of salts. The most important point here is that because table salt is so dense, if a recipe calls for Kosher salt, the amount of table salt substituted by volume should be half of the amount of Kosher salt called for. This is another article worth reading.

In other words using the same amount of differing salts can have drastic consequences. 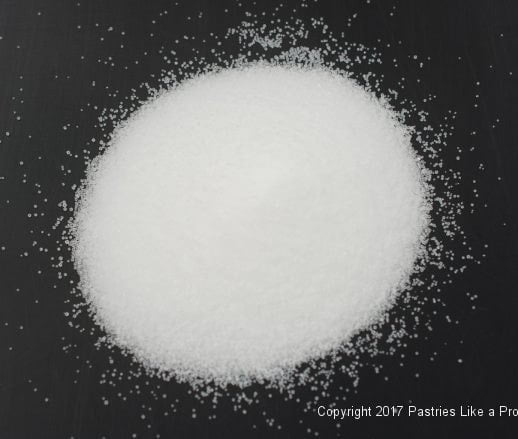 This is the most common salt available and is usually iodized. It is the saltiest tasting of all and considered to be the densest salt. It is commercially produced today by the use of salt brines and has anti-clumping additives to keep it free-flowing. 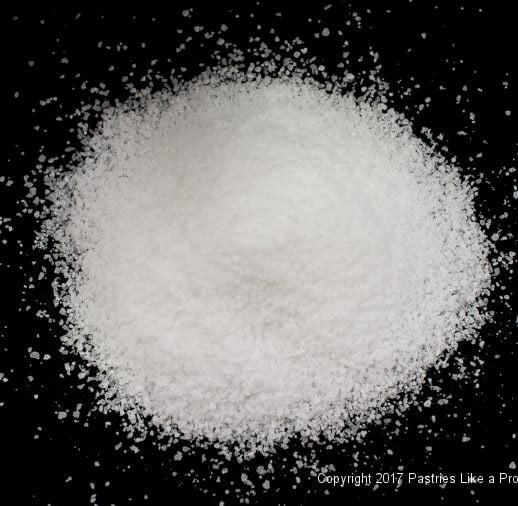 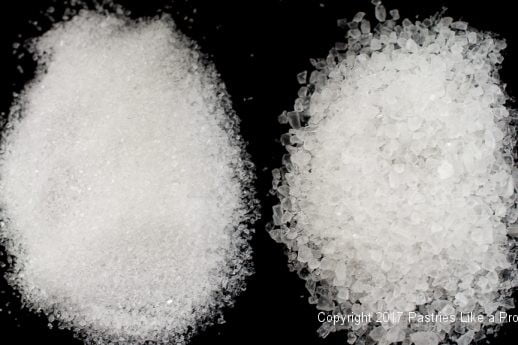 It is exactly what it says. It is the least processed of salts since the flakes are collected from evaporated sea water. It can come in fine or coarse as seen above.

One of the most expensive is Fleur de sel which forms naturally from shallow pools of seawater only during certain months of the year when it is dry in France. This delicate salt is skimmed off by hand making it very expensive. There are less expensive sea salts but Fleur de Sel is considered to be among, if not, the best. It should be used as a finishing salt being added at the end. It is particularly good with chocolate and in "salted" pastries and caramel.

While many in the baking world use kosher salt, I prefer table salt. It mixes well where the larger crystals often take longer, it is the strongest tasting salt and in most recipes prior to the "discovery" of other salts, was the only one used.

However, herein lies the difficulty. If a recipe states a certain type of salt, such as kosher, remember that it is less salty in flavor so more is used in that recipe to obtain flavor. If the same amount of table salt is used by volume the item will be over salted.

In a perfect world, we would all use the same weights, the same butter (salted or unsalted), the same salt, etc. But as we know, all too well, this is not a perfect world, never will be and probably shouldn't be. So read your recipes carefully and if substituting, do so carefully.

As a last thought, in the research for this post, every article said that when tested side by side in the same recipe which salt was used in which recipe was not apparent.  I think the word was indistinguishable.  So I am not sure why some recipes call for kosher and hopefully not sea salt except to finish.  I know we are all seeking to stand out, but I feel this is at the expense of the baker if they are not aware of the differences and how to substitute.

As always, thanks for reading.