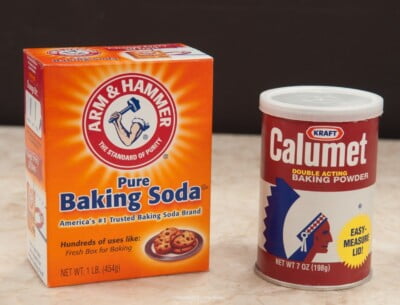 I didn't become interested in baking or cooking until after I was married.  Baking Powder vs. Baking Soda, Where and When to Use Which didn't begin to occur to me.

But when I did become interested in baking, one of the most confounding elements was baking powder vs baking soda and which to use where. I knew nothing of the science of baking and in that day (a looooong time ago) it wasn’t so easy to find such information (no internet, no baking science books).  When my interest became more than a hobby and I started writing about food, I developed everything on a trial and error basis.  I can’t tell you how glad I am I don’t have to do that anymore!

Both baking powder and baking soda belong to the leavening family.  This family also includes, ammonia, yeast, steam and air.  All of these help a product, with the addition of heat, have a more desirable texture.  Without one of these, our products would be dense and flat.  However, they do not all work the same and are not interchangeable.

Both baking powder and baking soda are chemical reactions within the recipe using both moisture and heat to trigger them.   Quick breads which include muffins, biscuits, scones, pancakes and waffles (except true Belgium waffles which are yeast raised) and fruit or vegetable breads are so called because they rise quickly due to the use of either or both baking soda and baking powder, depending upon the ingredients in the recipe.

At the shop, at least once, each new employee would use the wrong leavener in the carrot cake petit fours.  With buttermilk, honey and brown sugar being used, baking soda, an alkali, was called for to neutralize the acidity of these products.  One look and, without tasting, I could tell by the color and height the wrong leavening agent had been used.  When tasted, they had a distinct, unpleasant, almost soapy flavor and were dryer.  I would always have them remake the petit fours while I watched to make sure baking soda was being used.  The difference was noticeable to even the most novice baker.  They were denser as they should be, the color was much darker and the moisture much more evident.

While baking soda and baking powder may look alike, they don’t react alike.

Baking soda, known chemically as sodium bicarbonate, needs an acid to activate it.  When moisture is added, it forms bubbles of carbon dioxide.  If  baking soda is used alone, that acid has to come from other ingredients in the recipe such as  buttermilk, lemon juice, vinegar, honey, molasses, brown sugar, natural cocoa, yogurt or sour cream.  When heated, the baking soda forms the aforementioned sodium carbonate which can have an unwelcome aftertaste.  The acid in the recipe helps negate this and when the acid and baking soda get together, the heat of the oven helps the carbon dioxide gas release more quickly, resulting in a lightened product.

Baking powder is simply baking soda with an acid (usually cream of tarter) added to it. It’s sort of like an all in one.  This is used when there is a lack of acidic ingredients in the recipe, such as using milk, eggs, sugar, flour and flavorings that are non acidic.  There are basically two types of baking powder, single acting, which works with moisture.  It is not sold as far as I know anymore and certainly bakeries don’t use it because it cannot tolerate any sitting time so must go into the oven immediately after mixing.   Double acting baking powder begins forming a small amount of carbon dioxide bubbles as soon as moisture hits it and continues with the heat of the oven.  Products with double acting baking powder can wait for a brief time if needed before baking.

Baking powder can easily be made by combining 2 parts cream of tarter, 1 part baking soda and 1part cornstarch.  The cornstarch is not technically necessary if you are using the baking powder immediately.  It is there to absorb any moisture so the powder stays dry.  To test if this or any commercial baking powder is fresh, simply add 1 teaspoon to 1 cup of hot water.  If the mixture bubbles, it is fresh, if not pitch it.

However, you will find recipes that use both baking soda and baking powder.  While it may seem like this is done to confuse you, it is simply because there is some acidic ingredient in the recipe but not enough to use baking soda alone for the leavening.  So it is given a boost with baking powder to yield the best result.  That is why baking is more of a science than cooking.  The recipes or formulas have to be balanced.

Baking soda and baking powder also add to the final color of a product.  If you make buttermilk pancakes and use only baking powder to help them rise, they will be pale and unappetizing.  Using baking soda alone would neutralize the buttermilk and change the flavor.  By using both, you get a beautifully browned pancake that taste great.

However, if  you are using a pancake recipe with whole milk, then using baking powder is the right thing to do.

If you have a recipe that calls for buttermilk and you don’t have any (and don’t feel like going out and getting some), simply use whole or 2% (do not use skim) and 1 tablespoon lemon juice or vinegar for every cup of milk.  Scale it up or down proportionately and that will do the job.

I hope Baking Powder vs. Baking Soda, When and Where to Use Which has added to your knowledge and gives you more confidence with your baking.

This post will be filed under Baking Information for future reference.