I came across Tourte Milanase years ago.  It’s a spectacular tour de force. And, as with most spectaculars, it requires a bit of preparation to get it finished.  But when it’s done and cut into, the striking layers of green, red, pink and white are dramatic.

I’m writing about it now because it is a natural for Easter Brunch.  First of all, it’s impressive look..  It can be made ahead and room temped as the rest of the brunch is attended to.  A short warming in the oven and it’s ready to dazzle your family or guests.

While I am making the original Tourte Milanese, feel free to switch out ingredients. Don't like spinach? Switch to marinated artichokes or broccoli. Trade the ham for turkey. Cheddar cheese would be good and you can really add excitement with hot pepperjack cheese.

Don’t let the length of the recipe deter you.  Much of the prep can be made ahead to speed things along.  The tourte can also be assembled completely either baked or unbaked.

Both the book and the PBS series, Baking with Julia, featured Michel Richard along side Julia Child.  It’s as relevant today as it was then.  Tourte Milanase is the creation of Michel Richard, a French born pastry chef who was adventurous, jovial and fond of experimentation.  Born in France, he became a citizen of the United States. He was known to be open to the many culinary influences of this country with his hybrid French-Californian take on food.

The original recipe featured puff pastry as its crust.  But I feel the puff is too light for the multiple layers inside so I changed it to one of my favorite savory crusts, pasta frolla as used in the Torta Rustica.

Ingredients for the Tourte Milanese

While impressive, it isn’t difficult but time has to be set aside for sure.

For ease of preparation, I used chopped frozen spinach and jarred fire roasted red peppers.  For some reason, spinach stays frozen longer than any other vegetable we handled. Thaw a couple of days in the fridge or set it out at room temperature for several hours.  It should be very well thawed. Drain in a colander and then squeeze the water out until it is very dry.

The red peppers should be well drained and patted dry or, if using fresh peppers they should be roasted and cooled.

Use your favorite ham as long as it isn’t loaded with water.  If the ham has a casing, cut it off.

For the Omelets, I cut the chives and parsley and set them aside.  When cooking the eggs, I sprinkled them with the herbs, salt and pepper before I flipped them over.  Because they are large and awkward to flip, I cut each in half making it much less intimidating.

The omelets, spinach filling and red peppers can be made the day ahead and refrigerated making this a very manageable entree.

The crust for the Tourte Milanese should be made just before assembly. 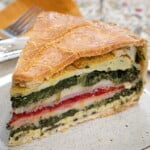 What could be more dramatic than spectacular layers of green, red, white and pink encased in pasta frolla for this best of all make ahead entrees?

This is for 2 omelets.  Use half the ingredients for each.  These can be made the day ahead and refrigerated.

This can be made the day ahead and refrigerated.

Assembly of the Tourte Milanese

Using the ingredients listed, go here for how to pictures.