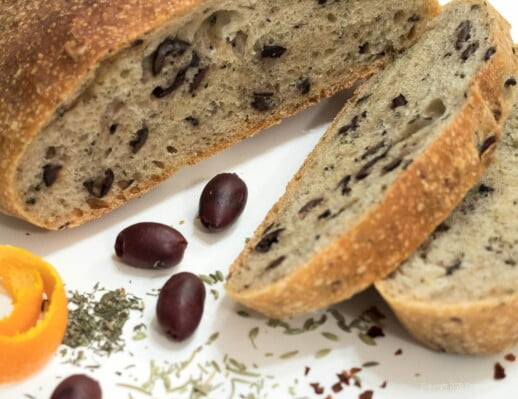 Several posts back I wrote about the original No-Knead bread.  This is a variation of that bread. There are a couple of new things I discovered with this loaf.  They can be applied to any No- Knead bread baked in a Dutch Oven…..or anywhere for that matter.  They include refrigerating overnight, an easier way to shape and get the dough into the pan, and making a proofer to help the cold dough along.  I also use a cold Dutch oven to bake my bread.

The bread itself is the much-admired  No-Knead Bread from James Lahey that I posted earlier.  Its very simplicity allows all the flavors of the appetizer to come through.  The bread can be completed in a matter of several hours to 18 hours.  I prefer the longer version for the depth of flavor that is not possible by speeding it up.  If you take the long route, plan ahead so the dough isn't ready for shaping at two in the morning.

When I made this No-Knead Sicilian Olive Bread, I found it ready to shape at one o'clock in the morning.  In my defense, I had planned for an 18-hour rise and it only took 12 hours.  So I deflated it with a dough scraper by folding it in on itself all the way around the bowl.  I placed the plastic wrap back on and put it in the refrigerator.  The next morning it had risen about half-way again but that was fine.

I found a new way that is much easier to get it into the Dutch oven.  Lightly spray a half sheet of parchment paper.  Deflated the dough again in the same manner and with one fell swoop placed it in the middle of the sprayed parchment.  With floured hands shape it into a round (it didn't need much).  Picking the paper up by the long ends, I lowered it into the Dutch oven keeping it in the middle.  It can be reshaped with a floured hand if need be but don't make a big deal of this.

So the take away is it doesn't have to be done in a day or a day and a half.  It can be refrigerated overnight and the shaping is much, much easier because it doesn't require shaping it on a floured surface and then transferring the really soft, somewhat wiggly dough to the pan.

The trade-off for this No-Knead Sicilian Bread if refrigerated is that it will require a lot longer to rise from the refrigerator.  You can speed that along, by making a proofer for it.  Place the Dutch oven in the oven with the light turned on.   Heat the oven at 350°F for exactly 1 minute.  Turn the oven off and leave it in there for about 2 hours or until it has almost doubled.  Remove the Dutch oven and proceed with baking.

I highlighted the important part because I forgot to turn the oven off once and the results were, as you can imagine, not good.  So just stand there for a minute to make sure you turn it off. I don't preheat it for that minute because if you open the door and put the Dutch oven in, you have lost much of the heat.  This proofer also works for any yeast product that needs to rise except those heavy in butter, such as brioche or laminated doughs.

Several questions were asked that might be of interest to everyone.  I use a 5-quart Dutch oven. It measures 9 ½" across the top and is 4 inches deep.

If bread flour is not available, use all-purpose but the water must be reduced as mentioned.  The rise might be slightly less but it will be fine.

Because I start the bread in a cold Dutch oven, the crust will be thinner. If you prefer a thick crust, simply remove it from the Dutch oven when it is finished baking. Put the bread on the oven rack by itself for another 5 minutes and the crust will much thicker. 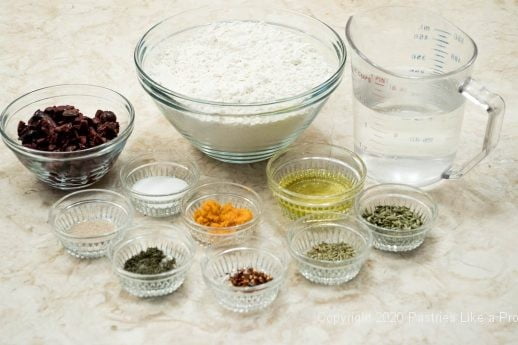 *I used bread flour but all-purpose will work also but it may not rise quite as much.  However, reduce the water to 1 ¼ cups if using all-purpose as it will not absorb as much water.

Place the flour salt and yeast in the bowl of a mixer fitted with the dough hook if available.  Whisk to mix. 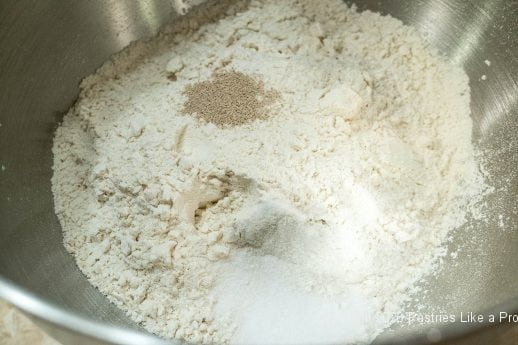 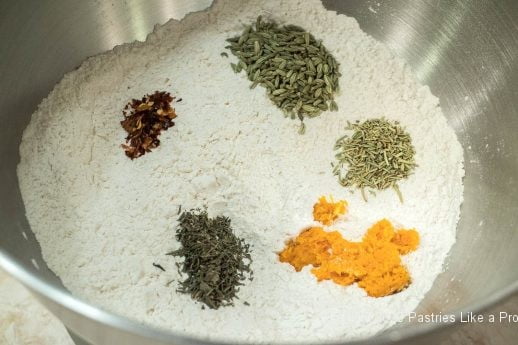 Add the olives and mix well so they are coated with flour. 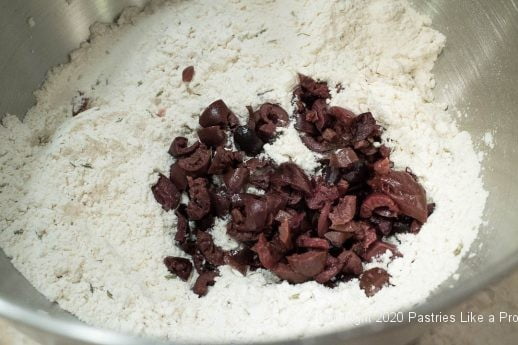 Combine the water and olive oil. 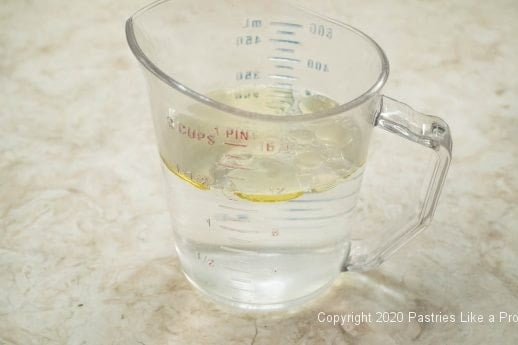 Pour it over and 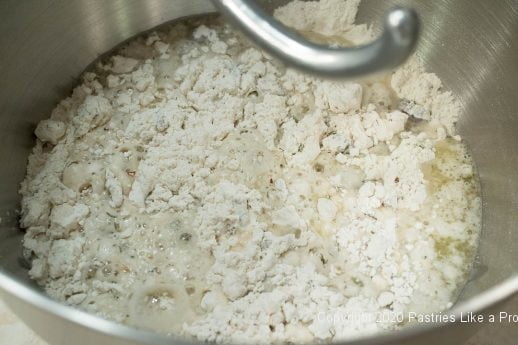 mix until it all comes together but no longer. 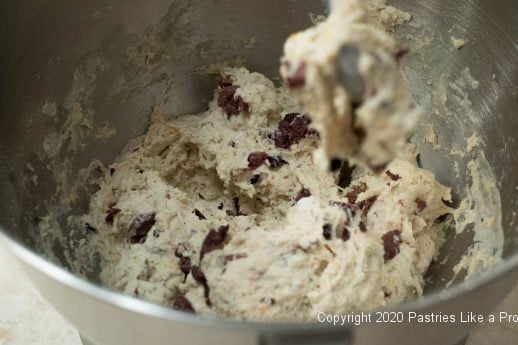 While still in the mixing bowl and using a dough scraper, fold the dough over on itself several times to better distribute the olives.

Spray a container at least 3 times a big as the volume of dough.  Transfer the dough to the bowl.  Spray a piece of plastic wrap with non-stick spray and place it, sprayed side down, directly on the dough. 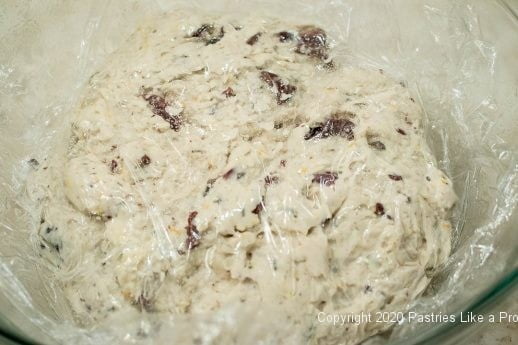 Cover the top of the bowl with another piece of plastic wrap, mark the time you finished the dough as well as when it should be done.

Place it in an oven with the light on and the door held ajar with a wooden spoon.  After 12 to 18 hours, the bread will have risen magnificently to two to three times its original size and be ready for shaping.

If you don't have time to shape and bake the dough, deflate it by folding the edges in toward the center with a dough scraper.  Cover it directly with plastic wrap and refrigerate it until the next day.

After the dough has risen (or when taking it from the refrigerator), place a large piece of parchment on the work area.  Spray it lightly with a non-stick spray.    Using a bowl scraper, 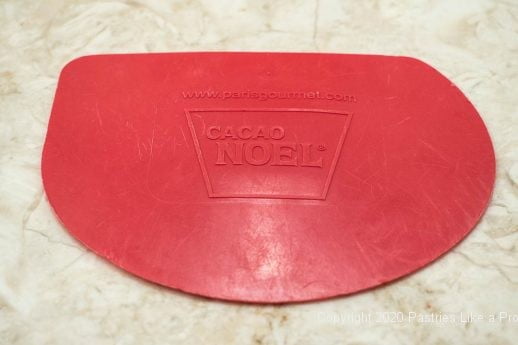 fold the edges of the dough into the center all around the bowl to deflate it. 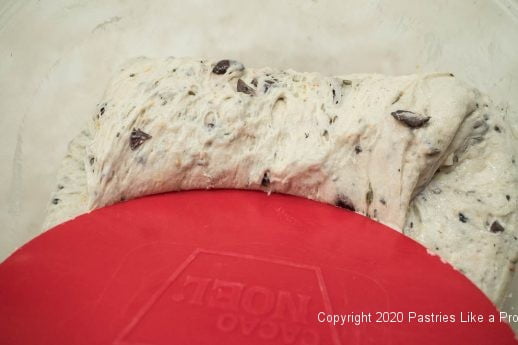 It should now be a ball of dough about the same size it was before rising. 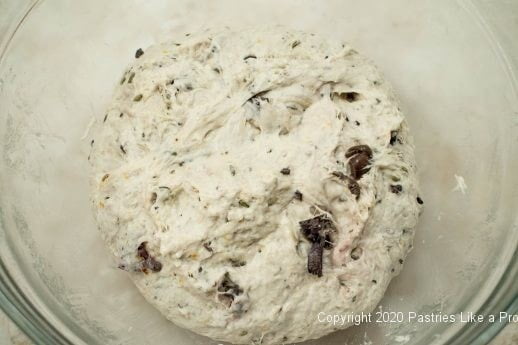 Using the bowl scraper, transfer the dough in one fell swoop onto the parchment paper. 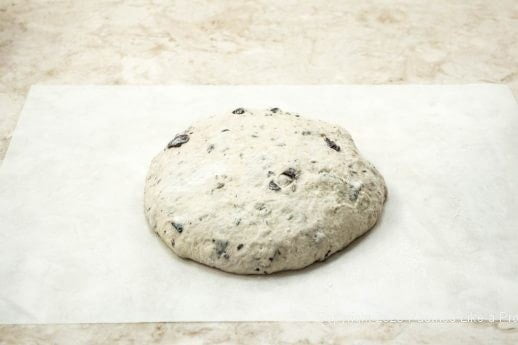 Using a floured hand, shape the dough into a round if it has gotten too far out of shape.  Don't stress over this.  Pick up the paper and lower it into a Dutch oven.  Reshape it with a floured hand if necessary. 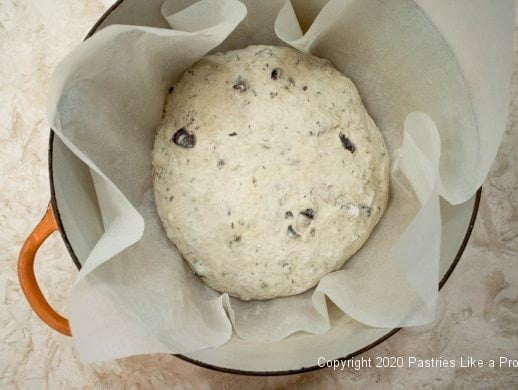 Cover it loosely with a towel and let it rise again.  It can be left at room temperature but will take a long time.  You can make a proofer for it by following the directions above and it will shorten the time considerably to about 2 hours.  You will know it is ready for the oven if you press it with your finger and the indentation stays.  If it doesn't, let it rise a bit longer.  I test it on the side so it won't show when baked. 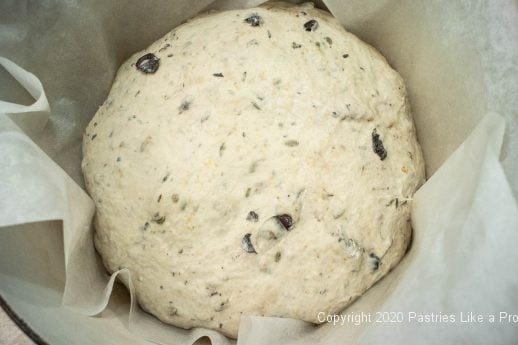 After the bread has risen in the, take it out of the oven while it is preheating.   Preheat the oven to 450°F.  When ready to bake, place the lid on the Dutch oven and put it back in the oven. 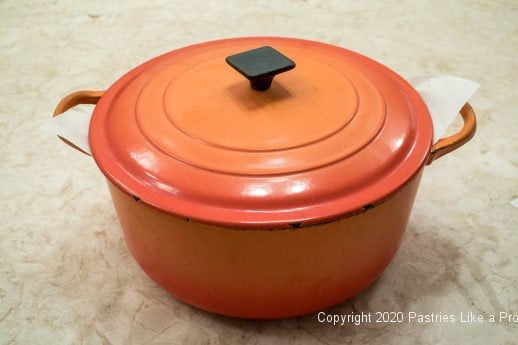 Bake for 30 minutes.  Very carefully remove the lid (it will be very, very hot) and bake for another 15 minutes.  It should be medium golden brown and have a crisp crust that sounds hollow when tapped.  The temperature will be about 190°F.

The bread should be removed immediately from the pan so it doesn't continue baking.  To do this safely, since the pan will be extremely hot,  pick it up by the parchment paper.  However, the paper will be very brittle and if that doesn't work, I use a pancake turner and get under the bread.  Stand it on its side and then pick it up with a potholder. Place it on a cooling rack.

If  a thicker crust is desired, see the  Helpful Updates from Readers above. 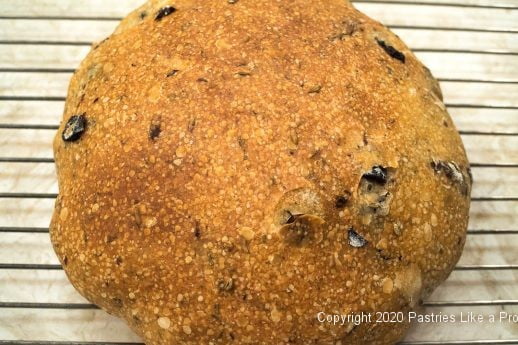 Wait at least 30 minutes before cutting.