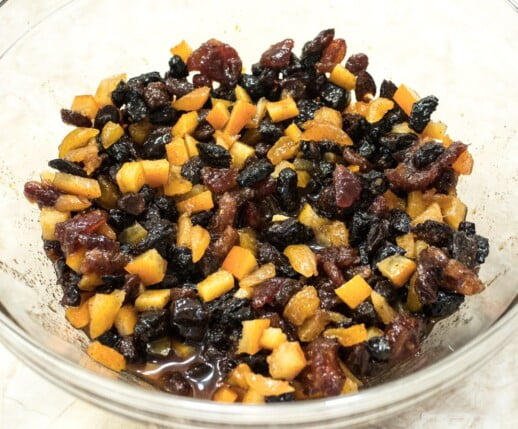 This Mincemeat is meatless and easily made.  Coming from England, it essentially consists of cutting up a lot of fruit and letting it age with citrus, spices, rum and brandy.  As the years have gone by, the meat has been removed and almost anything goes as far as what fruits to include.  This is my version but by far not the only one.  You can tell it comes from long ago when spices and alcohol were used as preservatives.Mincemeat, isn’t on the top of everyone’s list but I will be using it later this year with a couple of different toppings that may change your mind.

It is important if you are going to use Mincemeat to start it now.  I actually started my and put it in the refrigerator at the end of February.

If you’re into keeping the past alive this is the perfect way to do it.  In years past, Mincemeat was made of a large quantity of different raisins.  It could be me, but raisins are pretty much raisins so I reduced those and used a variety of dried fruits I particularly like.  If you want to change out some of the fruits, just keep the general amounts the same.

All the measurements are based on fruit that has been cut.  The fruit should be cut about the size of the raisins.  It is easiest to do this with scissors. If the fruit starts sticking, rinse the scissors in cold water and use them wet.

* The weight of this will vary depending upon the candied orange peel used.  I used mine which I made a week or so  in advance.

**For a non alcoholic version, either heat the rum and brandy to evaporate the alcohol or substitute apple juice.

Place the raisins and chopped fruit in a large bowl.  Mix in the orange and lemon zest.

Combine the brown sugar and spices, blending together.  Add the spice mixture to the fruit and mix well.

Whisk the honey, rum and brandy together.  Pour over the fruit and spices and stir together until completely combined.

Place in a covered container.  It can sit at room temperature several days or it can be refrigerated indefinitely. Turn it upside down every few days to soak the fruit evenly.

If it starts looking dry, add additional rum or brandy.