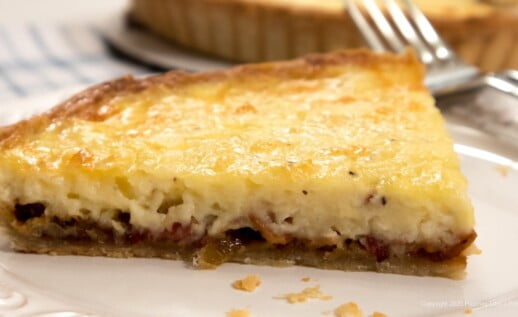 This Brie and Bacon Tart was sold from our take out shop.  The combination of brie, bacon and caramelized onions is hard to beat. Unlike a quiche, I have used a combination of low fat cottage cheese and plain yogurt as well as eggs for the liquid. Not only does it reduce the calories from cream which is usually used,  but this combination allows the flavors to come through since the cottage cheese/yogurt mix does not coat your tongue as does cream.

Any non sweet crust can be used such as the pâte brisée which I use here, an American Pie crust would work well as would the pasta frolla, one of my favorite savory crusts.  It has to be prebaked before adding the tart ingredients.

Caramelizing onions is an easy way to add depth of flavor with sweetened the onions.  After they have been cut, it’s a simple matter of combine a bit of butter or oil in a saute pan with the onions.  Even though I know that onions are mostly water, I am still amazed every single time that I start with a large pile and end up with very little. But that very little is packed with flavor and a little goes a long way.  The only caveat here, is to take it low and slow. If  the heat is too high, they will brown unevenly and can burn more easily.

If you’re a caramelized onion fan, the good news is you can make a large batch and, after cooling, wrap them in smaller portions and freeze them up to a couple of months.  That way you can always have them on hand.

There is a difference of opinion in the food world as to whether the rind of the brie is or isn’t edible and therefore should or shouldn’t be removed.  It is edible but not always desireable.  In this case, I fall in line with removing the rind for the reason that it does not melt when baked as does the cheese.  There is an easy way of removing it without cutting it off.  I partially freeze the cheese so it is hard on the outside.  It is a simple matter of scraping the rind off with the edge of a paring knife.

In order to combine the brie easily with the other ingredients, I freeze it almost solid and grate it so it melts uniformly thoughout the Brie and Bacon Tart.

This can easily be made ahead by making the crust, rolling it out and freezing it for several months unbaked and well wrapped.   The day before the filling can be made, the bacon fried crispy and both stored in the refrigerator.  As mentioned above the caramelized onions can be made several months ahead and stored in the freezer. The brie can be grated a day or two ahead and kept frozen.   When it comes time to bake it, simply bake off the crust, layer everything, pour the liquid over, bake and serve.

Ingredients for the Brie and Bacon Tart

Pâte Brisée
Using the above ingredients, go here for how to photos.

In a processor bowl fitted with the steel blade, combine the flours and salt; process 5 seconds to mix. Place the frozen butter in a circle over the dry ingredients.  Pulse the butter in until it is cut  into pieces about the size of large beans. Combine the egg, lemon juice and ice water and pour it in a circle over the ingredients in the processor.  Pulse until the mixture lumps together in bits about the size of peas.  Do not over-process and especially do not let the pastry form a ball.

Transfer to a piece of plastic wrap, push together into a ball, and flatten into an 8 inch disc. Wrap and refrigerate until very cold before rolling.  This can be made up to 3 days prior to using.

When ready to roll the pastry spray the middle only of a 9x¾ inch tart pan with a removable bottom. Set aside.

If the pastry is hard, let it sit at room temperature for a few minutes but it should remain very, very cold.  On a lightly floured surface, roll the pastry into a 11 to 11 ½ inch round.  Trim to 10 ½ inches.

Place the dough into the tart pan leaving the edges extend about ¼ inch above the rim of the pan. Freeze the crust.

Filling for the Brie and Bacon Tart
Combine the cottage cheese, yogurt, cornstarch, salt and pepper.  Beat the eggs to combine and add them to the mixture, whisking all together.  If making the day ahead, store, covered, in the refrigerator. When ready to use, stir to combine if the mixture has separated.  Yield: 2 cups

Caramelizing the onions -Go here for how to photos.
Peel the onion. Cut the onion in half leaving the root end intact.  Slice it iabout ¼ inch thick or slightly thinner.

In a large, heavy skillet, heat the butter or oil and add the onions.  Caramelize the onions over medium heat until they are a deep amber brown. Stir often and lower the heat as necessary to ensure they get uniformly colored and prevent overbrowning or burning.

Cool completely.  Wrap in plastic wrap if making ahead.  Store in the refrigerator or freezer.

Preparing the Brie
Freeze the brie until it is hard on the outside.  Use a paring knife to scrape away the rind. 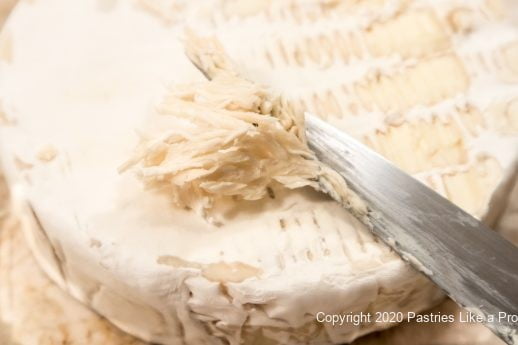 Use the point of the knife to scrape the rind off rippled marks. 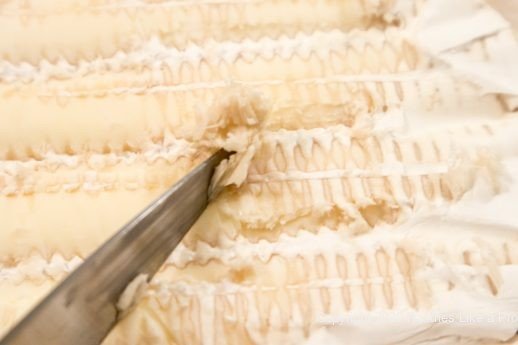 Be sure to get the edges also. 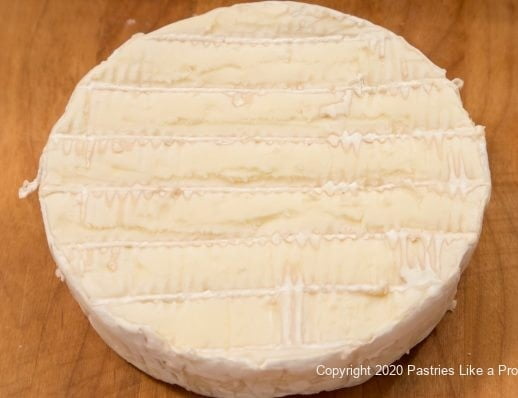 Cut the brie in 3 pieces and freeze until almost frozen. 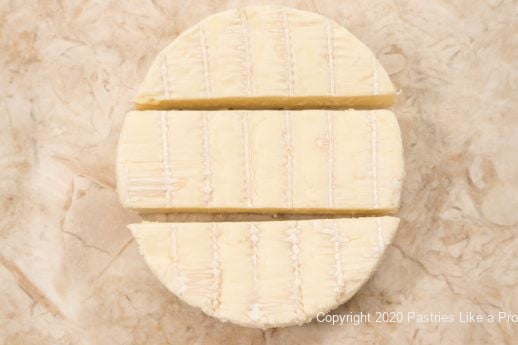 If it freezes completely that’s fine.  After it has frozen, grated it on the largest hole on a box grateror use the blade with the largest hole for a processor .  If it is really hard to grate, let it sit for a few minutes at room temperature  Grate only one piece at a time onto waxed paper.  Keep the others in the freezer.  Place the grated cheese, still on the wax paper, on a baking sheet and put in the freezer while you grate the second piece. Place the second piece on top of the first while you grate the last piece on a third piece of wax paper. Leave them in the freezer until layering. 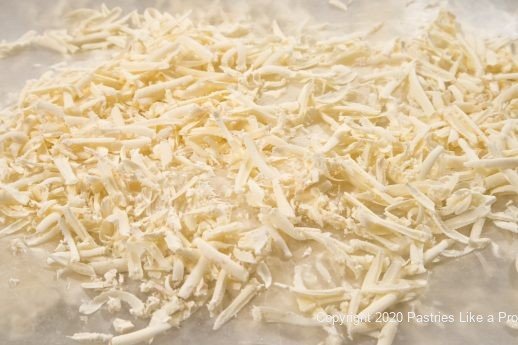 Cut and Frying the Bacon
I use the regular cut, not the thick bacon for this recipe as it will fry up crisp.

Cross cut the bacon and place in a frying pan. 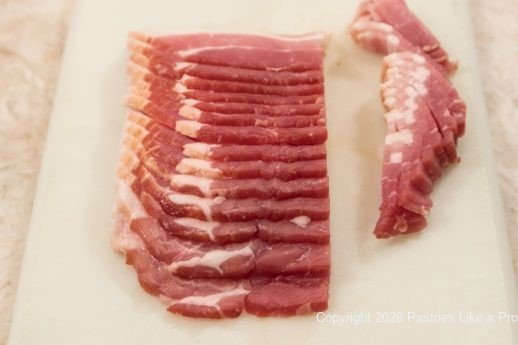 Over medium low heat, fry the bacon until the pieces can be separated into pieces which when crisply fried, will make uniform bacon bits. 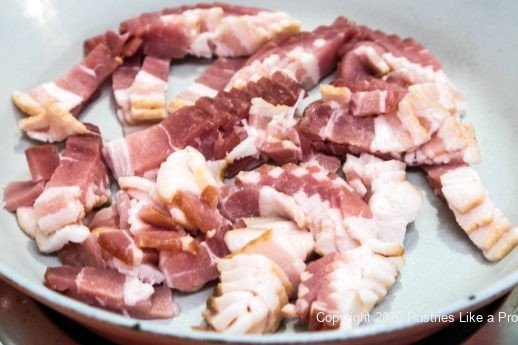 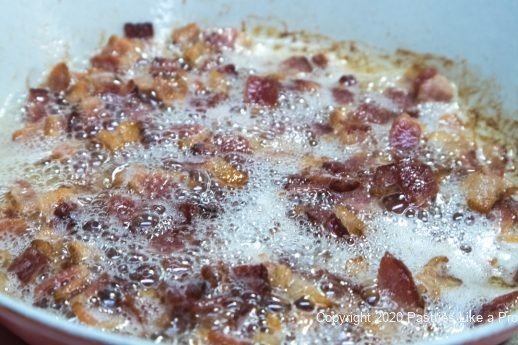 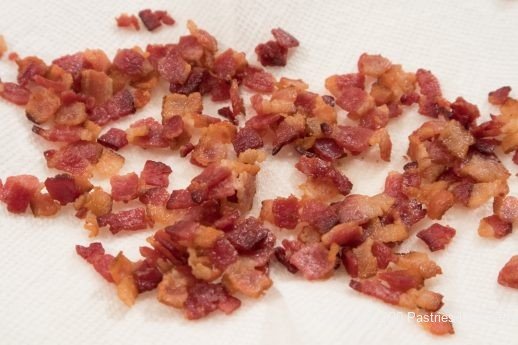 These can be fried, drained, wrapped and refrigerated the day before.

Preheat the oven to 425°F. Place the crust on a parchment lined baking sheet, preferably rimmed.  This makes it easier to move the pan in and out of the oven. 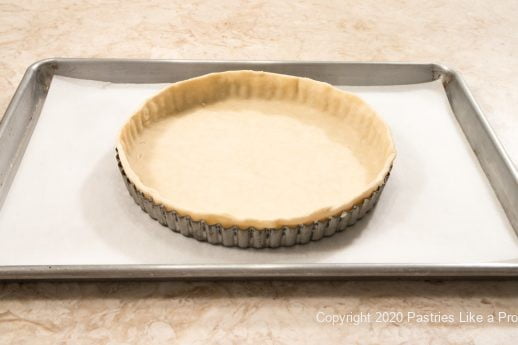 Spray a large piece of foil with a non-stick release and place it, sprayed side down on top of the crust. 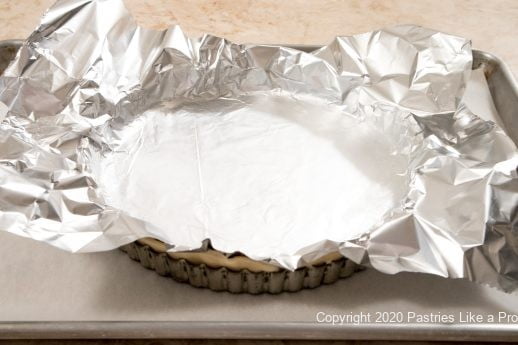 Make sure it is worked into the sides of the crust.  Fill it with pie weights or beans to the top of the crust. 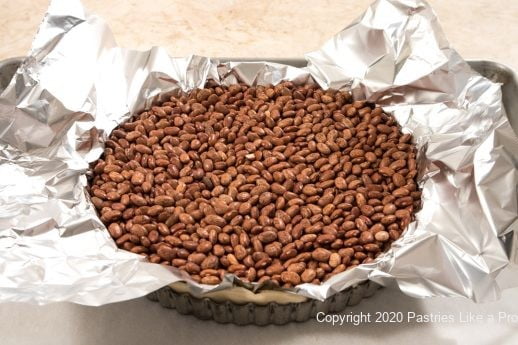 Bake for 15 minutes. Remove the foil with the beans by gather the four corners of the foil and lifting it out.

Continue baking for about 10 to 12 minutes more until the crust is lightly browned and baked through.

Cool completely, leaving it in the pan. 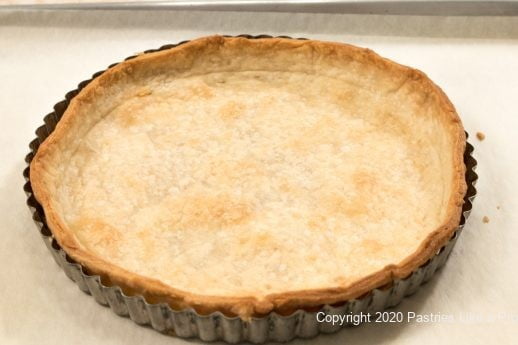 Spread the caramelized onions on the bottom of the crust. 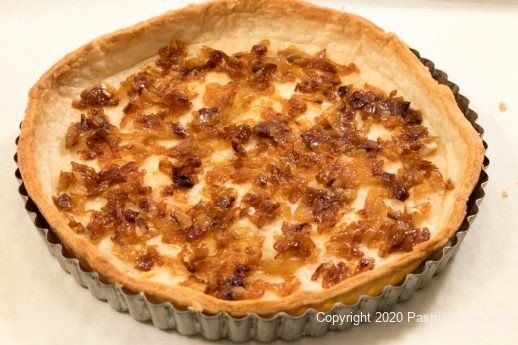 Top with the bacon bits. 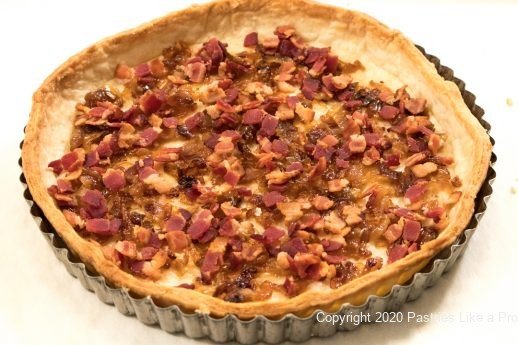 Place the grated brie evenly over the bacon. 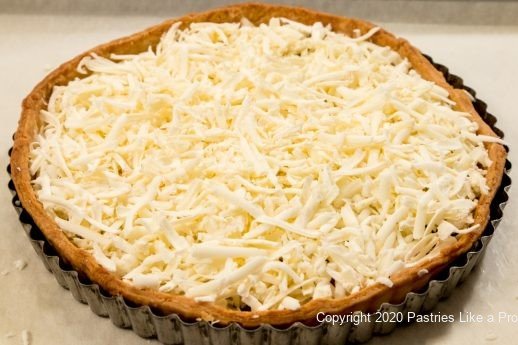 Pour the liquid carefully, starting at the outer edge and working towards the middle. 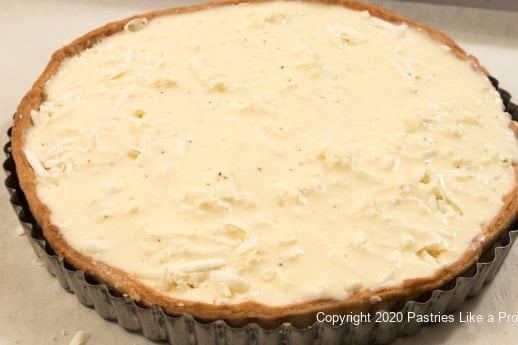 Bake for 35 to 45 minutes until just beginning to brown on top and the filling is set.  Let rest for 10 to 20 minutes before releasing from the pan and serving. 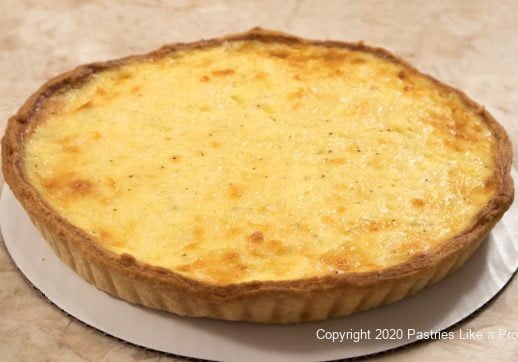 Yield:  Served with a salad this Brie and Bacpon Tart serves 4.

Other savory tarts you might enjoy are:
French Pastry Crust with a Salmon Tart
Torta Rustica
French Onion Tart (one of my favorites)