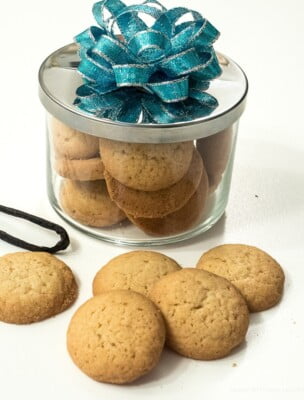 If you read this recipe for Vanilla Wafers really early, please check again as some of the instructions have changed.

In the States, we generally use baking powder or baking soda for chemical leavening agents. I used baking powder on my way to homemade vanilla wafers.  But something strange happened.

I made the first batch and they pretty much looked like vanilla wafers.  They were the right size, slightly rounded on top and uniform, everything a vanilla wafer should be.  But when I tasted one, it seemed a bit flat and not as crispy as the bought ones.  I suppose this is the time to tell you I love vanilla wafers.  Mostly just out of the box.  Mike does too so you might find them in my pantry from time to time.

I started thinking about what I could do to up the crispness and give it more flavor. That’s when I thought of ammonium carbonate also known as baker’s ammonia.  It's hard to find on a grocery store shelf but very available online.  I got mine from Lorann Oils.  It was the leavening agent used prior to the 19th century before baking powder and baking soda came into existence.  It is still used in European and Middle Eastern baking where it is also known as hartshorn. 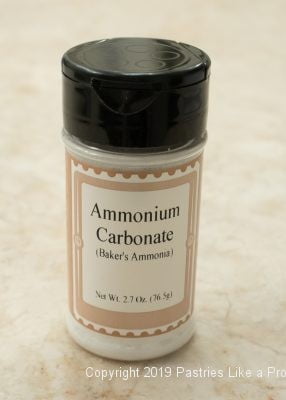 Ammonium carbonate is used when you want the end product to be very crispy such as crackers and crunchy cookies.  This texture is caused when the tiny crystals dissolve during baking leaving very small air cells making it easier for the moisture to escape.  In addition, a very clean taste is left, none of the soapy aftertaste that baking powder or baking soda can leave.

One of the things to be aware of is the smell.  Ammonium carbonate is also used to revive people who have fainted.  If you've seen a period movie in which someone, usually a woman, is on the verge of or has fainted and something is being waved under their nose – you’re right – it ’s ammonium. So when you open the bottle DO NOT take a big whiff, it’s noxious but harmless.  The kitchen may also smell of it when the cookies are baking but there will be no trace of it in the baked product and the smell dissipates quickly.

It is not used for cakes since the gaseous ammonia given off during baking cannot escape the thicker, higher batters and would make the baked goods smell bad. 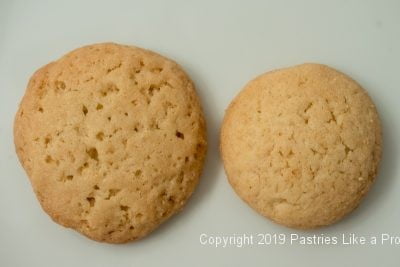 Being unhappy with the holes left in the exterior of the cookies, I continued my research and found that you have to dissolve the ammonium in liquid before using to make sure it is evenly distributed in the dough.   Another test shows the dramatic difference when it was dissolved in the flavorings.  In the left vanilla wafer, it was combined with the flour and undissolved.  In the cookie on the right, the ammonium was dissolved in the liquid flavorings. 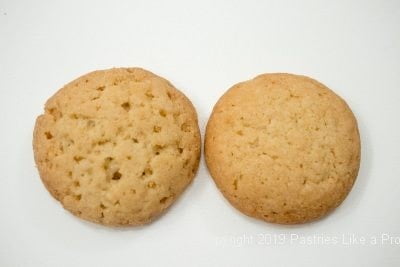 When broken apart you can see more holes and a lighter texture in the ammonium cookie on the left. The baking powder cookie has a tighter texture and is not as crisp. 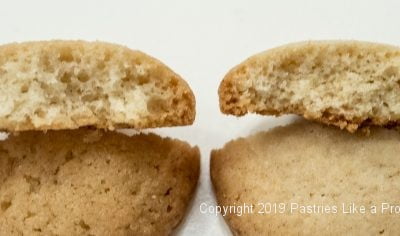 To solve the taste of the cookie I used vanilla, almond and lemon extracts which gives the wafers a more exciting taste than vanilla alone.  You could also flavor these any way you wish, lemon, almond, coconut, peppermint, whatever you like.

I actually made these as one of the ingredients in Banana Pudding recipe which I will post next week.  In the meantime, you can make your vanilla wafers, store them in a container and be halfway to a great banana pudding made from scratch.  They are really easy to make and for the pudding, it doesn’t make any difference which leavening you use.  However, if I am going to eat them by themselves, I prefer ammonium carbonate for the crispy, lighter texture. 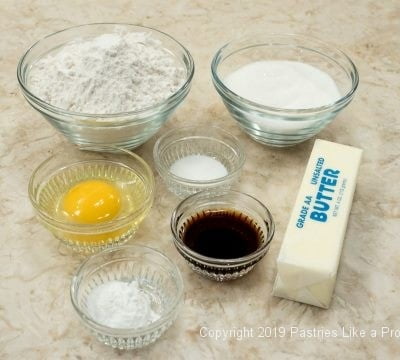 Whisk together the flour, and salt. Set aside. If using the baking powder, add it to the flour mixture.

Stir together the vanilla, almond and lemon extracts.  If using  the ammonium carbonate add it to the liquid.  Stir to dissolve.  Set aside.

Beat the butter and sugar together until very light and fluffy. 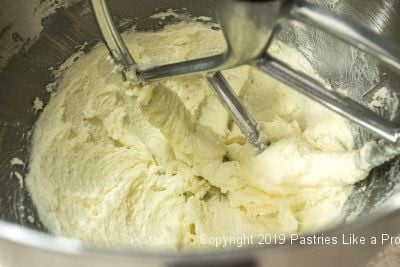 Add the egg.  Stir the flavorings with the ammoniuum and add it also.   Beat to combine. 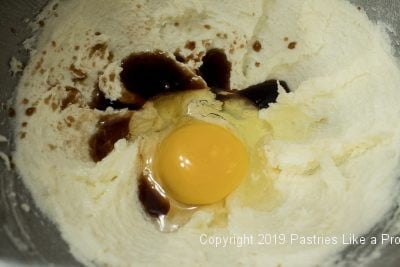 The mixture may curdle (mine did each time). 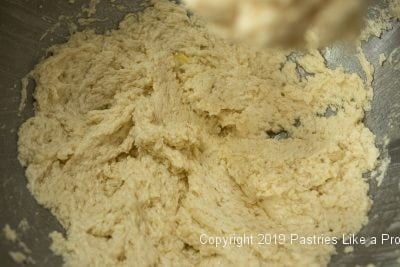 Raise the speed of the mixer and continue beating.  If the mixture doesn’t come together, don’t worry about it, adding the flour will take care of it.

Add the flour mixture all at once and beat on low until all of the flour is incorporated.  The dough will be very thick. 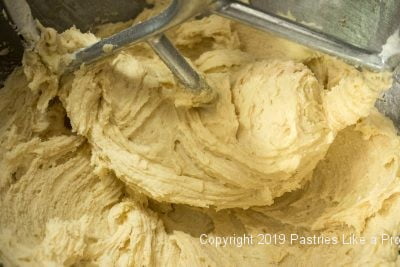 With a #100 disher/scooper drop the cookies about 2 inches apart on the prepared baking sheets. If the dough is too soft, refrigerate it to firm it. Alternatively, drop by rounded teaspoons.  Flatten slightly with the heel of your hand or two fingers. 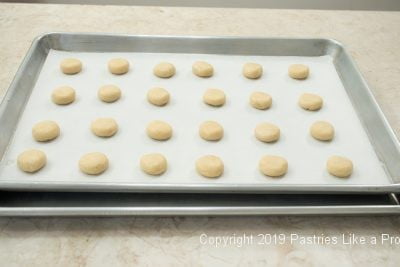 Double pan and bake for 18 to 20 minutes until golden brown and completely set.  Cool on racks.  Store in an airtight tin. 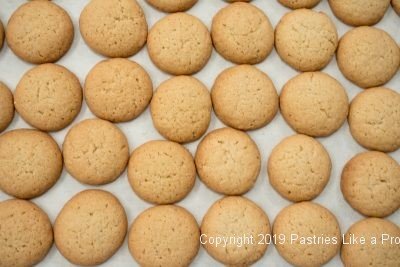 If you enjoyed this article, you might want to take a look at these:

The Frustrating Facts about Measuring Flour
The World of Cinnamon
All Salt is Not Created Equal in Baking
Baking Powder vs. Baking Soda - Where and When to Use Which

Additional recipes using ammonium carbonate can be found at: