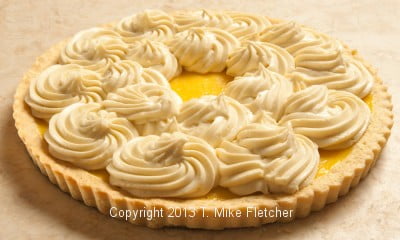 When I first became interested in baking and pastry seriously, I was intrigued with pastry cream, also called creme patissiere in French.  The "Food Lover's Companion" gives the definition of creme patisserie as "a thick, flour-based egg custard used for tarts cakes and to fill cram puffs, eclairs and napoleons."  Bo Friberg, the noted Pastry Chef/Instructor describes pastry cream in his book, The Professional Pastry Chef as:  "Making pastry cream is one of the basic techniques that anyone involved with cooking (pastry shop or otherwise) should master, because pastry cream has so many applications.  In an emergency, it can be thinned and used as a sauce; it is a base for soufflé, it is  filling and flavoring for cakes; and it can be used as a toping for Danish or other pastries.  In the pastry kitchen, there should always be a supply of pastry cream in the refrigerator."  I have always thought of it as a custard like cousin of creme anglaise, that marvelous French dessert sauce.

Pastry Cream can be flavored many different ways including white, milk or dark chocolate, coffee, with liqueurs, citrus zest or any extracts, although vanilla remains the most common.

The basic ingredients of pastry cream include whole eggs and/or egg yolks or egg yolks only, sugar half and half or milk, cornstarch or flour and a flavoring agent.  I have seen some recipes include butter, although not one of the original ingredients, it does add richness.

Flour was the original thickener and the reason, in the beginning, I did not like pastry cream.  It had a pasty aftertaste to me which I did not like.  Thickening only with cornstarch can have the same problem, but there are other problems with cornstarch, the biggest of which is it does not thaw if frozen.  Cornstarch breaks down after freezing, loosing it's original thickening power.  Because we froze the majority of our products at my bakery, cornstarch was out.  But so was all flour because of the aftertaste problem.  So I came up with a modified version which used flour and gelatin to set the pastry cream.  The gelatin served two purposes.  It held the pastry cream at room temperature (a big plus when plating ahead of time as caterers and hotels did) and it did not break down when frozen.  So my recipe includes some flour and gelatin in proportions that make a smooth, rich pastry cream without a rubbery texture that either alone can produce.

It is important to make pastry cream in any pot other than aluminum or cast iron which can discolor the final result producing a grayish pastry cream that is not very appealing.  Because we made pastry cream in large batches we couldn't do it over direct heat as the bottom would burn before the pastry cream was thickened.  So we would put it over a double boiler until it reached 190 degrees on a thermometer.  At that point we moved it to direct heat as the mixture has to boil for several minutes to completely cook the flour and thicken it.  Even in small batches this is a safer way to do it as milk scorches and burns easily.  If this happens, pitch it because the burned flavor will permeate the entire batch.  It is important to stir constantly to avoid lumps.

Because the egg yolks are initially whisked only with the flour, it is important to temper the egg yolks by adding the hot milk very slowly at first.  After the first third has been added, it can be poured in more quickly, whisking constantly.

After the pastry cream is made, cooled and chilled we added one more item to make it irresistible.  My mother always added whipped cream to the pastry cream and it transports it to another realm. It lightens what can be a rather heavy filling and adds a creaminess impossible without it which is why this is a rather firm pastry cream.

In the above photo, you can see how well the pastry cream holds it shape and adds to the final flourish of the Orange Blossom Tart.

I consider this recipe a base recipe which means it is used in many other recipes.  Although the measurements may change, it is always made this way.

Soften the gelatin in the water and set aside.

If using the vanilla bean, scrape out the seeds and add to the milk along with the pod; heat the milk until hot but not boiling.

Whisk the egg yolks and sugar together in a non-reactive saucepan. Whisk in the flour. Remove the pod from the milk. Add the milk slowly, whisking well and scraping the corners of pan with a rubber spatula to make sure all of the egg yolk mixture is incorporated. Place over medium heat and, stirring constantly, bring to a boil. Boil for 1 minute, stirring constantly. Remove from the heat and add the vanilla (if using extract). Tear the dissolved gelatin into small pieces and stir it into the hot liquid (there is no need to liquefy it, the heat of the mixture will do this for you). Pour into a storage container, cover the surface with plastic wrap, poke a few holes in it and refrigerate overnight to chill or freeze.

Note:  If using the optional cream, have the pastry cream chilled.  Whip the cream to about medium peak.  Whisk the pastry cream  to smooth it out.    Fold in the whipped cream and used as desired.