Croissant Queen of Breads is the preface to the Croissant chapter featured in my book, "The New Pastry Cook", published by Wm. Morrow Co., in 1986.  It is usually available on ebay and sometimes through Amazon.com.

My teaching assistant brought in a pristine copy he got on www.half.com. I have updated the technique for the final rise to more closely approximate a professional proofer in temperature and moisture.  I also now recommend instant yeast, sometimes known as bread machine yeast which was unavailable at the time.

Of all the pastries thought of as French, the flaky, buttery rolls, called croissants have gotten to be the best known in America.  The word means crescent, and the French give croissants a special place of honor at their breakfast table.

With any layered dough such as croissant dough or puff pastry, the most important process is to get the butter between the layers of dough but not to incorporate it into the dough. When the butter has been properly layered, it will melt in the heat of the oven, forming steam that separates the layers, causing the dough to expand and achieving the much sought after flakiness.

Traditionally, for croissants, this has been done by making a bread dough and rolling it out in a rectangle, two thirds of which is buttered.  The dough is then folded and turned.  The rolling, folding, and turning are repeated several more times, forming hundreds and hundreds of layers of butter and dough.  In this method, the most traumatic occurrence was having the butter break through the dough.  It gave many aspiring at-home pastry chefs a complex they never got over.

In 1982, I developed my processor method of cutting frozen butter into chilled dough.  This technique, along with controlling the rising, yields the flakiness that is the standard by which good croissants are judged.  In addition, altering the traditional method of making the folds produces a croissant ready to eat in 4 ½ to 5 hours, start to finish--a far cry from the 18 to 36 hours it used to take.

Although any yeast product is best eaten the day it is made, slight changes I have made in the formula provide a dough that is tasty and acceptable the second day as well as the first.  Bread flour (simply stirred before measuring) is used for its high gluten content, which makes it a strong flour capable of supporting the rapid expansion, caused by the yeast and by the method of layering the butter, when the dough is baked.

While bread flour provides the structure that allows the croissants to rise to their fullest potential, to provide the tenderest possible dough, buttermilk has replaced the traditional milk and water.  The acid in the buttermilk tenderizes the gluten and allows the use of a strong flour without sacrificing texture.

Along with unsalted butter, there is also a small amount of oil in this formula, which lubricates the gluten strands, allowing them to stretch without breaking.  In addition, the oil keeps the dough pliable when it is cold and facilitates rolling out. By allowing the pastry to rise only once, after the croissant is shaped, a bready texture is avoided and time is saved.

Croissant pastry must be kept chilled.  The basic flour dough is first chilled in the freezer for about an hour after it is made.  It is then returned to the processor along with the frozen butter, and the two are cut together.  Chilling the dough and using frozen butter prevents the butter from being incorporated into the dough.  The dough is then rolled out and given a double turn, or four-fold (folded into four layers), as opposed to the traditional three-fold.

Therefore, the number of times the dough must be rolled and folded can be reduced from four single turns to three double turns, making is possible to complete the rolling and folding in one fell swoop and eliminating the long rest formerly needed between turns.

It is the cook's good fortune to have available dry powdered buttermilk, usually found in supermarkets near the regular dry milk or in the dairy section.  It is my first choice for this recipe.  If buttermilk powder is not available, regular buttermilk can be used, but, because of the difference in viscosity, it is necessary to dilute it with water.  It is also very important that any liquid be cold when it is added to the flour in the processor, to avoid fermentation taking place before desired.  Cold tap water or refrigerated buttermilk are fine.

Should the dough become too soft or elastic to roll, put it on a baking sheet and place in the freezer to firm up.  As long as the dough remains chilled, a light sprinkling of flour uder and on top of the dough should suffice when rolling out.

Other departures from the traditional method of making croissants will be found in the baking.  Several of the recipes call for the pastries to be "double- panned" and also baked in the upper third of the oven.  This simply means that two baking sheets are used, one directly on top of the other.  This prevents the bottom of the pastry from burning during the time it takes to finish the baking, and it is done even when heavy professional baking sheets are used.

However, if you are using insulated baking pans, do not double-pan. For croissants I have also found that lowering the usual baking temperature to 350 degrees and baking for a longer priod of time (25 minutes) provides a completely baked product without sacrificing any of the flakiness. 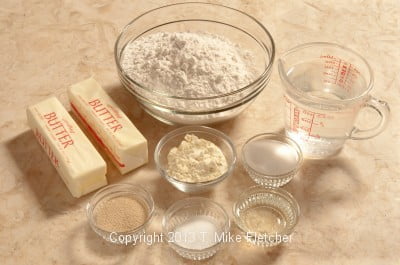 *If using whole buttermilk, use ⅞ cup buttermilk and ¼ cup water in place of the water and dry buttermilk powder.  Everything else remains the same.

Combine the water and oil.  Set aside.

With the steel blade in place, add the flour, powdered buttermilk, instant yeast, sugar and salt to the bowl of a food processor.  Process about 5 seconds to mix everything.  With the machine running, pour the liquid down the feedtube;process until a ball forms.  Continue processing for 30 seconds more to knead the dough.  The dough should ride the blade and clean the bowl but remain soft.  Remove from the bowl.  If it is slightly sticky (and it may be), knead by hand 5 or 6 times,

then flatten into a disc ½ inch thick.  Wrap in plastic wrap and chill in the freezer for 60 to 90 minutes, or until the edges are very firm about ½ inch in all the way around.

If using a marble rolling pin, put that in the freezer also.

Cut each stick of butter into 8  pieces and then in half lengthwise.
Return to the freezer to keep hard.

Remove the dough from the freezer.  Divide the disc into fourths and each fourth into 3 pieces.With the steel blade in the bowl, place 3 pieces of dough in the processor with ¼ of the butter.  Process until the butter and dough are cut into varying sizes.  Turn out onto work surface.  Repeat in quick succession 3 more times.

On a lightly floured surface, shape the mixture into a rectangle about 6x4x2 inches. Lightly flour the top of the dough and roll it into a rectangle about 18x6 inches, keeping the ends as square as possible and the sides as straight as possible.  Use your hands to even it out and keep the butter from scooting out.Wipe the rolling pin frequently with paper toweling and scrape the work surface to prevent the dough from sticking.

Repeat rolling, folding, and turning in this manner for the second turn and once more for a total of 3 turns.  Because the butter is frozen and the dough well chilled,  it should be possible to complete all 3 turns without chilling the dough between turns.  However, if necessary, place the dough on a baking sheet and put it in the freezer for 15 to 20 minutes, then proceed. With each turn the dough will become smoother but still with butter visible.  If desired, the dough may be refrigerated between turns.

After the third turn, place the dough in a plastic bag and put in the freezer for about 30 minutes before shaping.  If the dough is not to be used immediately, remove from the freezer after 30 minutes and refrigerate up to 3 days before using.  Or the dough may be frozen after completion for 3 to 4 months.  In this case, defrost 24 hours in the refrigerator before using

Fill a 9x13 inch pan half way with the hottest tap water available. Place on the bottom of the oven or the lowest shelf possible. Place an oven rack in the upper third of the oven. Close the door.

Line 2 baking sheets with parchment paper.  Divide the dough in half. Return half the dough to the refrigerator. On a lightly floured surface, dent the dough with a rolling pin several times to make it easier to roll.   Roll the dough into an 8x124 inch rectangle. Cut into 4 pieces 6x8 inches.  If it is difficult to get it to 24 inches, roll to at least 18".Cut each of these rectangles in half on the diagonal.  Each piece will have one square and two pointed corners. Pull the square corner gently to the side to even up the triangle somewhat.

Roll it up lengthwise stretching the dough gently to lengthen it more once the initial roll is started.  Place on an ungreased baking sheet and tuck the “tail” corner well underneath. Bend the ends down and in toward the center to form the crescent shape.

Cover the rolls with a towel and place the croissant on the rack in the oven.    Let proof until doubled – about 1 hour.

Remove the croissant from the oven and remove the water. Preheat the oven to 350 degrees. While the oven is preheating, brush the croissant with the beaten egg.  Double pan and bake in the upper third of the oven for about 25 minutes, until golden brown and firm to the touch.

To Make Ahead: Freeze after baked and completely cooled. To serve, place directly from the freezer onto baking sheets and heat in a preheated 350 degree oven for about 10 minutes.