Published: May 6, 2020 by Helen S Fletcher · This post may contain affiliate links · 16 Comments 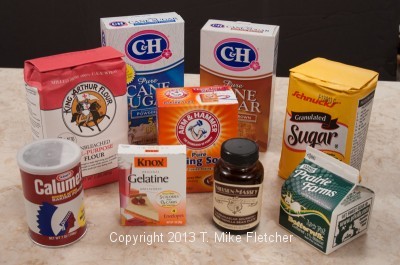 This Top Ingredient Substitutions for Baking article was posted several years ago. Due to the present circumstances, I updated it and thought it would be helpful if you find you are missing a key ingredient.  Hopefully, you will find it on this list.

I don't keep every flour there is in the house.  But I do know how to make pastry flour, cake flour, and self-rising flour so I don't have to.  As long as you have granulated sugar, there are easy fixes for other sugars you may not have.

When I first started the bakery, I had never heard of leaf or sheet gelatin.  I used granulated gelatin. Because there are so many different strengths of leaf gelatin, I stuck with granulated and use that to this day.

Cake flour is finer than all-purpose but there is a substitution if cake flour is not available.  Powder sugar can be made from granulated sugar. While there are many substitutions, realize that the end product may not be exactly the same.  Below are ingredient substitutions for some of the most popular baking ingredients.

All-purpose flour is just that - it is made to mix with everything and can be used almost anywhere.  While Bread flour is best for making yeasted products along with some cookies, all-purpose flour can be substituted.  The bread may not rise quite as high and the cookies may not be quite as chewy but they will both be good.

Flours such as rye, whole wheat, white whole wheat, or specialty flours have no substitutes due to their gluten content as well as taste.

When cake flour is called for in a recipe and none is to be found in the pantry, remove 2 tablespoons of all-purpose flour per cup and add 2 tablespoons cornstarch.  Whisk together to combine completely.  Use as called for.  While the cornstarch will lower the gluten count of the flour, it won't replicate the fineness of the flour so the texture might be a bit different.

Sometimes a recipe calls for self-rising flour.  I don’t stock it in my kitchen and I bake a lot.  It can easily be made by combining 1 cup all-purpose flour, 1 ½ teaspoon baking powder and ¼ teaspoon salt.  Whisk together completely and use the amount called for.  Multiply for the amount called for in a recipe.

I suggest making this as you need it instead of keeping a supply of it.  It's difficult to mix the ingredients well enough to they are equally distributed throughout the whole.  By mixing as needed,  the accuracy is ensured.

This was interesting and I am quoting an article from the  Kitchn blog.  Several substitutions were tried making a plain vanilla muffin.  The following two were the favorites. I have not tried either one of these so if you do, let me know how it turns out

#1 Carbonated water (I find this difficult to believe because there is no fat to replicate the egg yolk.  I do know that substituting carbonated water for regular water in a  pancake mix makes a much fluffier pancake (thank you, Dirk). ¼ cup carbonated water = 1 large egg.

To make a substitute for buttermilk or sour milk called for in a recipe, remove 1 tablespoon whole or 2% milk per cup and add 1 tablespoon lemon juice or vinegar.  It will probably curdle but that is fine.  Sour cream and Greek yogurt can be used by thinning it slightly with water to the consistency of the buttermilk which is somewhat thicker than milk.  Plain yogurt can also be used.

For 1 cup of heavy cream combine ¾ cup whole milk plus ¼ cup melted butter.  This can be used in baking and cooking but not for whipping.

I use equal parts of milk and heavy or light cream for this really easy ingredient substitutions.

Margarine, shortening such as Crisco, coconut oil, or if you have heavy cream,  just place it in the mixing bowl and beat it past the stiff stage and it will separate into butter and whey.  I once turned 16 quarts of cream into butter at work by simply overbeating it.  We used it in baking.  One article suggested putting heavy cream in a bottle and shaking it until it made butter.  The mixer is easier and faster.

While it's true that butter is 20% water, most recipes substitute measure for measure with no discernable problem.

Whole milk and 2% milk are interchangeable but skim milk is not because it lacks any fat at all.  It acts more like water.

For each teaspoon combine ½ teaspoon cream of tartar, ¼ teaspoon baking soda, and ¼ teaspoon cornstarch.  Multiply the ingredients for the amount needed.  Again, I suggest making this for each recipe.

Place 1 cup of granulated sugar in a blender (do not use a food processor, it won’t work).  Add 1 teaspoon cornstarch.  Blend until powdered.

This ingredient substitutions for superfine sugar is suggested when it is necessary to dissolve sugar quickly and completely.   Egg whites in particular, especially for meringues call for superfine sugar.  Place sugar in a processor bowl and process 10 to 20 seconds until very, very fine.

There are 4 strengths of gelatin sheets – Bronze, silver, gold, and platinum.  They require soaking the sheets in cold water at which point, they are lifted out and added to a hot liquid.  Because they are different strengths, which will set differently, I never used them.  I used powdered gelatin 250 bloom strength.

Knox gelatin sold in grocery stores is fine.  Each envelope contains 2 ½ teaspoons, enough to jell 2 cups of liquid or 1 ½ cups of solids.  It must always be softened or “bloomed” in cold water, then added to a hot mixture directly or heated to liquefy if the mixture it is being added to is cold.

There are different types of gelatin but no ingredient substitutions.

Into the top of a double boiler, combine 1 pound of marshmallows with ¼ cup corn syrup.  Heat until the marshmallow melts, whisking occasionally.

Per 1 teaspoon extract use 1 teaspoon vanilla paste or powder. If a recipe calls for pure extract and you only have imitation, double the amount.

There are different types of yeast on the market.  Most prevalent is active dry yeast and instant or bread machine yeast.  There are variations but these two are most used.

Active dry yeast is just that.  it is yeast that has been dried and needs to be reconstituted with water before it is added to the recipe.  I recently read an article stating that active dry yeast is unreliable because it contains dead yeast and the whole package can be dead.  While the outer shell of the yeast cells may be dead due to the high heat it is subjected to in processing the inner core still comes to life when reconstituted with water.

I have never had a fail in over  50 years of baking with it.  This comes in units of 3 packages.  Each package contains 2 ¼ teaspoons (7 grams or .25 ounces) of dry yeast.  It also comes in bottles from which it is measured.  After opening, the yeast should be kept in the refrigerator or, if used very infrequently, it can be frozen with no harm.

Instant yeast also called Bread Machine Yeast can be added to a recipe without reconstituting by simply including it in the dry ingredients.  This comes in bottles only.

Then there is the camp that says it doesn't matter and they can be used interchangeably.  I'm in this camp.  The biggest difference between the two is the active dry yeast will require a bit more rising time.  But since the rising time is always a suggestion, not a mandate, it really doesn't matter in the long run.

I will be using only instant yeast in the future simply because I see no reason to keep both on hand.

While these ingredient substitutions will get you close to the original, remember they most likely may not be exactly the same.