This Boston Cream Pie is a perfect example of the use of component parts in one recipe. When I started baking for my family and friends, I didn't care how many recipes I collected and used. However, when I went into baking professionally, making each cake from a different recipe was impractical.  How many yellow cakes, chocolate cakes, or white cake recipes did we need? How many buttercream and ganache recipes could we use -  each with a subtle difference?

It quickly became apparent that base recipes that could be tweaked and varied were what was needed.  Every recipe used in this Boston Cream Pie has already been blogged by me with the how-to photos, which is why I refer to it as a parts cake.

The original Boston Cream Pie came from the Palmer House in Boston. According to The Kitchn:
"The dessert dates back to the late 1800's and is typically credited to Chef Sanzian of the Parker House Hotel (the present-day Omni Parker House) right in downtown Boston. Other recipes for pudding cakes existed at the time, but this particular version somehow rose above the rest to become a classic.

Why it's called a pie instead of a cake is anybody's guess. One of the more likely theories is that cookware-deprived colonists used shallow "pie" tins for cakes as well as pies and didn't get too fussy about what they called the resulting dishes!"

The traditional cake for the Boston Cream Pie is a sponge cake or a butter sponge cake although I have seen a lot of yellow butter cakes substituted.  I have tried it both ways and prefer the sponge which was a surprise to me.  Most of the recipes do not call for the soaking syrup.  I use one, not because the cake needs moisture - on the contrary, it is very, moist - but to impart another level of flavor.  I use a rum syrup as does the Omni Parker but add a bit of coffee to deepen the flavor.

The Omni Parker version of the Boston Cream Pie finishes the cake with ganache, and uses white fondant to make a spider web design on the top. They finish the sides with sliced almonds.  I do use ganache on the sides and use the almonds because I think it finishes the cake.  However, feel free not to.  A lot of photos just let the ganache run down the sides as I do in the Espresso Fudge Cake.  Either way, Boston Cream Pie has a well deserved reputation for its taste.

Everything for this can be made ahead.  The sponge can be made a month ahead and frozen.  The same for the pastry cream.  The soaking syrup and ganache can be made a week ahead. In fact, the assembled cake can be frozen as long as you use a pastry cream, such as mine, that does not use cornstarch for the thickener as if the pastry cream does it will become watery when thawed.  Also, be aware that there will be ganache left no matter if you finish the sides are not.  It is impossible to make just enough ganache.  So make a pan of brownies, top it with the leftover ganache and sprinkle it with a nut of your choice.  The ganache is now all used up!

Pastry Cream - The recipe below has the addition of butter to smooth it out since it will not be lightened with whipped cream. You will not see the butter added in the photographed version.
1 ½ teaspoons gelatin
2 teaspoons cold water
1 ⅓ cup milk, very hot
4 egg yolks
½ cup sugar (100 grams or 3 ½ ounces)
¼ cup flour (35 grams or 1 ounce)
1 teaspoon vanilla extract or 1 vanilla bean split
2 tablespoons butter

Soften the gelatin in the water and set aside.

If using the vanilla bean, scrape out the seeds and add to the milk along with the pod; heat the milk until hot but not boiling.

Whisk the egg yolks and sugar together in a non-reactive saucepan. Whisk in the flour. Remove the pod from the milk. Add the milk slowly, whisking well and scraping the corners of the pan with a rubber spatula to make sure all of the egg yolk mixture is incorporated. Place over medium heat and, stirring constantly, bring to a boil. Boil for 1 minute, stirring constantly.

Remove from the heat and add the vanilla (if using extract). Tear the dissolved gelatin into small pieces and stir it into the hot liquid (there is no need to liquefy it, the heat of the mixture will do this for you). Add the butter and whisk to melt.  Pour into a storage container, cover the surface with plastic wrap, poke a few holes in it and cool it.   Refrigerate overnight or up to 5 days or freeze for a month or two.
Yield: 2 cups (490 grams or 17 ounces)

Preheat the oven to 350 degrees. Line two 9x2 inch cake pans with parchment rounds and spray the center only. Set aside.

Combine the flour and baking powder and set aside.

Place the egg yolks, ½ cup of the sugar and vanilla in a mixing bowl fitted with the whisk attachment. Beat until very pale yellow and very fluffy. The mixture should form ribbons when the whisk is lifted.

Place the egg whites in a clean bowl with a clean whisk,. Beat until the whisk leaves a trail in the egg whites and the whites are at the soft peak stage. Slowly add the remaining sugar and beat to medium peaks. Do not overheat the whites.  Underbeating a bit is preferable to overbeating.   Pour the egg yolk mixture and half the flour over the egg whites. Gently fold in. Fold in the remaining flour. Take about 1 cup of batter and whisk into the butter; return this to the main amount of batter and fold in.

Pour half  (310 grams or a scant 11 ounces) into each of the prepared pans and bake for 12 to 15 minute until lightly browned and the center springs back when lightly touched or a cake tester comes out clean.  If not using that day, freeze.
Yield: Approximately 620 grams batter or 21 ¾ ounces

Rum Soaking Sauce -  I have added a bit of coffee to deepen the flavor. This syrup without the coffee was used with the Pina Colada Cake.

Dissolve the coffee in the rum.  Set aside.
In a medium-sized saucepan combine the syrup ingredients, except rum. Bring to a rapid boil then remove from the heat and stir in the rum mixture.

In a medium-sized saucepan combine the syrup ingredients, except rum. Bring to a rapid boil then remove from the heat and stir in the rum mixture.
Yield:  ⅓ cup

Combine the cream, corn syrup and butter in a small saucepan. Heat until the butter melts but do not let it boil. It should be steamy hot but not boiling. Remove from the heat and submerge the chocolate. Wait for 2 minutes then gently whisk until smooth.  It should be thick enough to use but if it isn't, set aside at room temperature until slightly thickened but still pourable.
Yields: 2 cups or 510 grams or 18 ounces.

Whisk or beat the pastry cream in a mixer to soften it and make it spreadable.  Set aside. 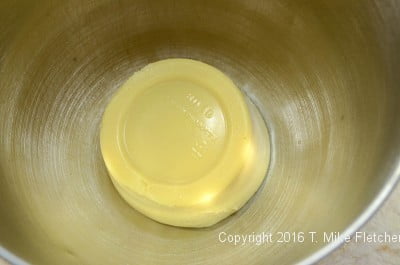 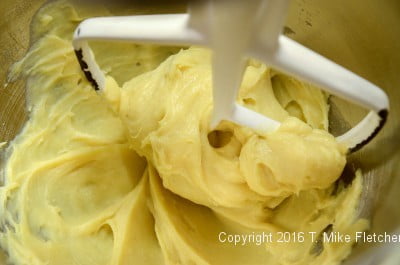 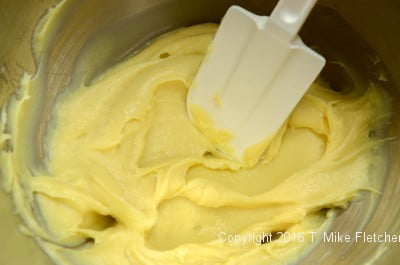 The underside of the cake layers will absorb the soaking syrup better than the top which has a soft crust on it. Turn one layer over on a cake board.  Brush with ½ of the syrup. 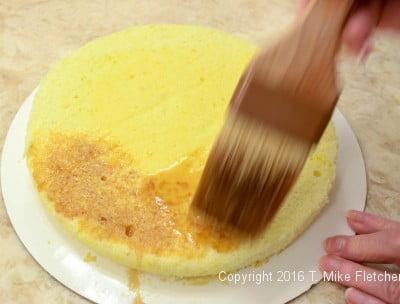 Spread the pastry cream evenly over the layer. 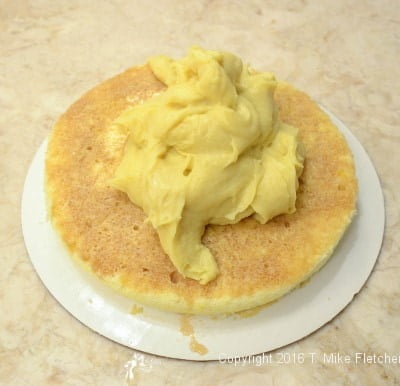 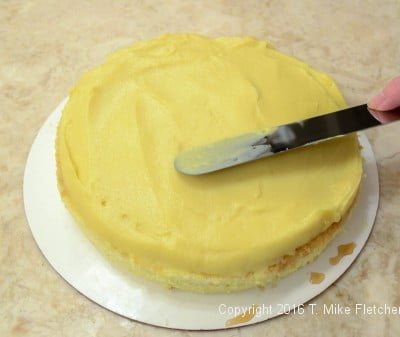 Turn the second layer upside down and brush with the remaining syrup. 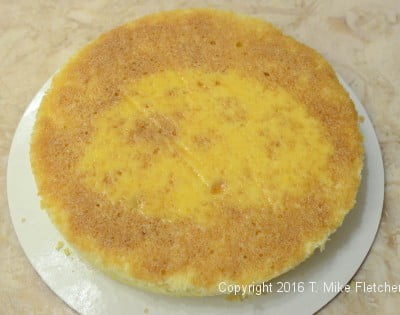 Place it, right side up, on top of the pastry cream. 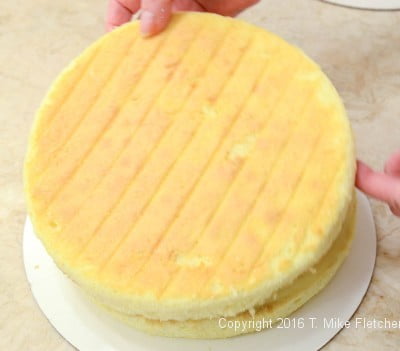 Place a cardboard on top of the cake layer and press down evenly to spread the pastry cream to out to the edges. 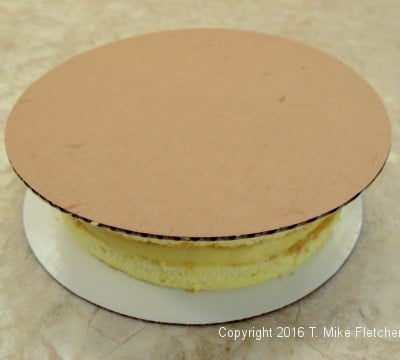 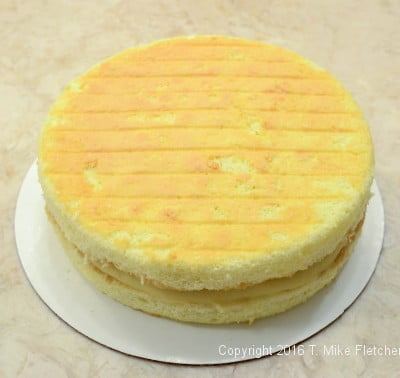 Pour about ⅔ of the ganache over the cake and, with an offset spatula, push it over the sides and let it drip down. 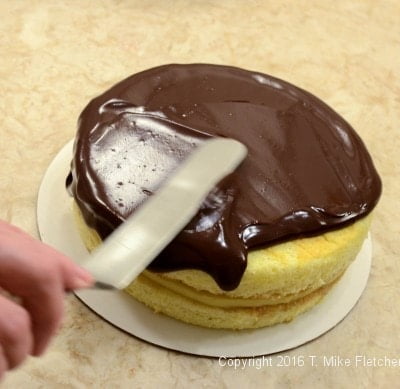 If finishing the sides, smooth the ganache over the sides of the cake.  Immediately, press the almonds into the ganache. 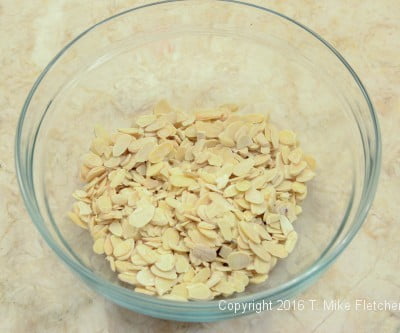 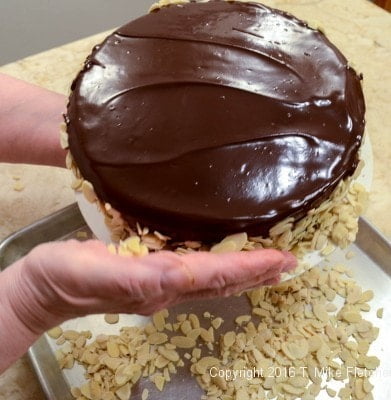 Refrigerate. To serve, remove from the refrigerator for  about a hour before serving.  Refrigerate any leftovers. 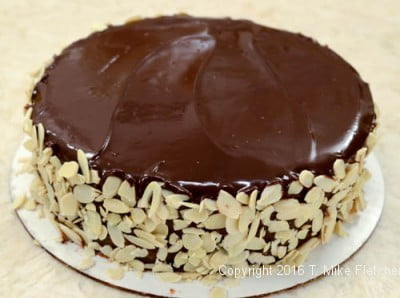 Several other versions of Boston Cream Pie can be found at:
https://whatscookingamerica.net/History/Cakes/BostonCreamPie.htm
https://www.yankeemagazine.com/article/food/boston-cream-pie-2#_
https://www.foodnetwork.com/recipes/bobby-flay/boston-cream-pie-recipe.html - video of the Omni Parker House making the dessert in their kitchen hosted by Bobby Flay